Had a wonderful day with wonderful people in Addo yesterday, a full day with some special sightings for friends out from England who had made a trip up from Cape Town specially to Port Elizabeth, book a tour with Alan Tours and to visit the world famous Addo Elephant National Park, now the third largest national park in South Africa behind only the Kruger Park, and the Kgalagadi Transfrontier Park and coming in second in the popularity stakes is quite a reputation to uphold and the park does so admirably.

We came across loads of Elephant and Zebra, one of those days that define themselves by what one regularly sees, Zebra and Elephant in this case. We made our way to the main camp where we had lunch in a rather busy restaurant being a Sunday when a lot of the locals choose to come and enjoy the excellent menu at this Cattle Baron franchise. Food as always excellent we headed out into the afternoon with the hope of bumping into some buffalo and as always some of the Lion that EVERYBODY wants to see. We had earlier seen a lot of buffalo activity around one of the southern waterholes and was hoping to find a large herd if the amount of tracks and buffalo patties were anything to go by. There had also been a number of early sightings of male Lions in the north which we doggedly followed up on with little success except for a dusty interior, eyes and nose. Finally accepting defeat we started south once again when I received a message (there are a number of us who are in a WhatsApp group where we share sighting info) confirming the sighting of the herd of buffalo at the waterhole in the south of the park. Off we go!

Brilliant sighting. A herd of around 200 Buff, Zebra, Elephant bulls, Warthog and plentiful bird life all competing for this valuable resource in a increasingly dry park. A wonderful sighting in light that is describe as the golden hour before sunset. “The Grand Finale” to a wonderful day, one of the group enthusiastically gushed.

It wasn’t over yet!

Exiting from the dense sub-tropical thickets onto the extensive southern plains, with stunning vista of the Sundays river dune fields and beyond the blue waters of Algoa Bay with the ghostly, shaded outline of St Croix Island, home to the largest colony of African penguins anywhere, nestled as it is in the waters of the bay.

We finally making our way back home on a short loop road, we spotted a Secretary bird foraging, sometimes stately at others comically as it danced over the scrubby plains when we noticed it concentrating its activities in a single spot. Wack with its powerful foot, whack a second time, standing concentrating, feathers raised, whack, whack again. Then it bent down and picked something up, dropped it and bent slowly, tensely again to pick it up. Clickkedy click ran the cameras throughout the episode when eventually the regal bird straightened up to present what it had caught. A large rodent, swayed from its long, slate blue hooked beak which, with a few backward gulps of its head, promptly swallowed the whole animal right there and then while the meal was still warm.

Arriving back I sat down to review some of the shots of the day, when I came across the Secretary bird sequence, carefully zooming in on the bird and it prey I discovered that the prey was indeed that of a rodent but not that of a mouse or rat something quite common but rather sadly to discover that the prey had been that of a baby Scrub Hare. 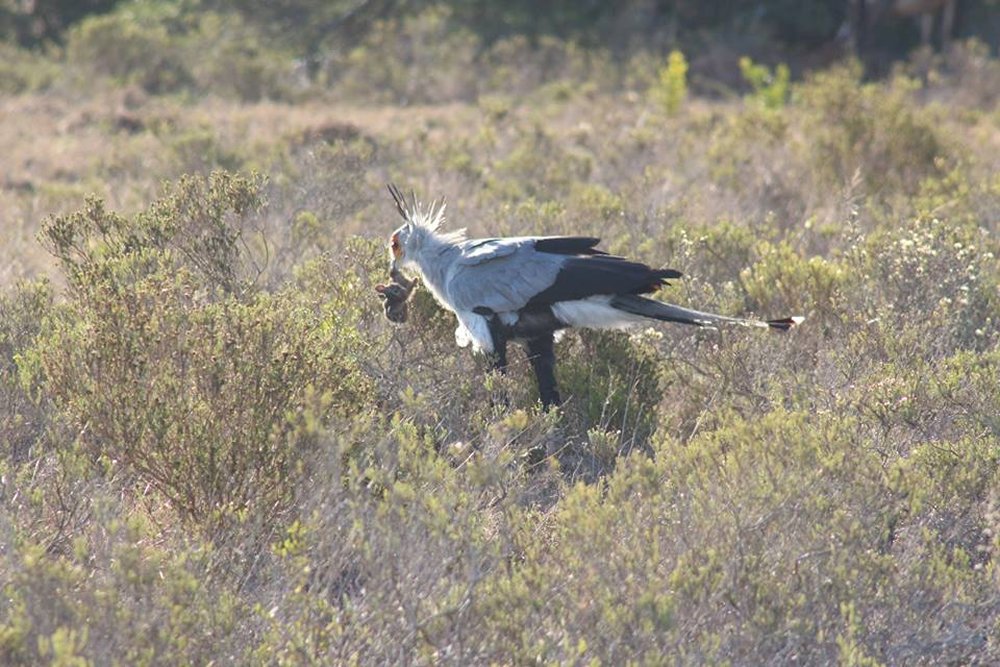 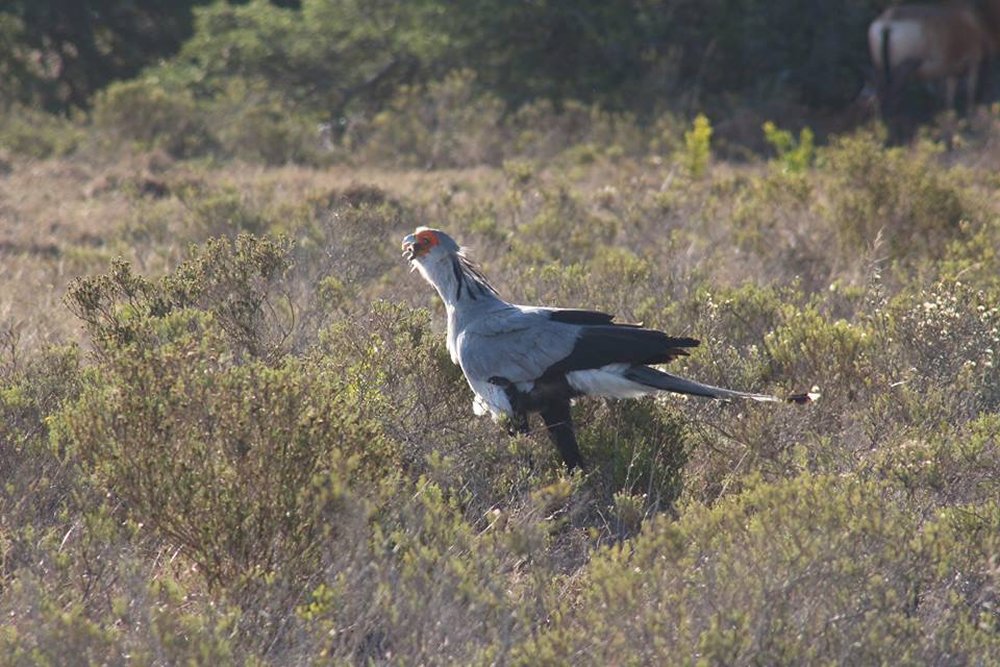