This is a school that was established on farm land on the western outskirts of Port Elizabeth. When I first visited the school early in 2008 with Jeremy and Jo Stattersfield with son Ned from Dover in England, they came away with what is best described as shock at the conditions that the twenty six pupils of all ages were subject to.

Without saying a word and about a year later I again was contacted by the family. Ned and friends had raised in excess of R3500.00 from selling cakes and holding raffles in the street. A further R8 500.00 was raised by the family and a total of R12 000.00 transferred to me where we contracted an local builder to upgrade their disfunctional toilets and other facilities.

Facilities that in 2009 now had to cater for almost four times the number of learners as in 2008 at 110 pupils. 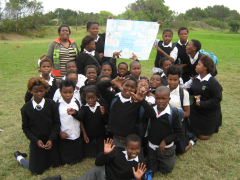 Further to this Jeremy and family put together a huge parcel and at great trouble and frustration sent this parcel with a lap top commputer over for the school to make use of. Two full teams of football jerseys and a football with pump were included after young Ned was so taken a back at the sight of the pupils playing football with a rolled up ball of plastic bags as a ball.

The Happiness on the faces of the youngsters should have been seen to be believed when out came first of all the jerseys then the brand new football.

Well done Jeremy, Jo and Ned for a wonderful gift you have given the school children of Elukholweni they will never forget you.