The stories here are a few among a long list of stories told by mothers and grandmothers, fathers and grand fathers to their sons and daughters as the traditional, oral history of the tribe. This practice started a long, long time before the advent of the written word.

These stories were and are told in warm, darkened, single roomed round structured rondavels. Built traditionally of clay brick this circular structure with only a single door and a two glass less windows will be lit by the light of day or later with only the embers of the communal fire glowing in the center of the communal living room. These huts are set on grassy slopes and spread throughout the rural farms and communities and have been this way for centuries as has the practice of passing down the oral traditions of the tribe from generation to generation. 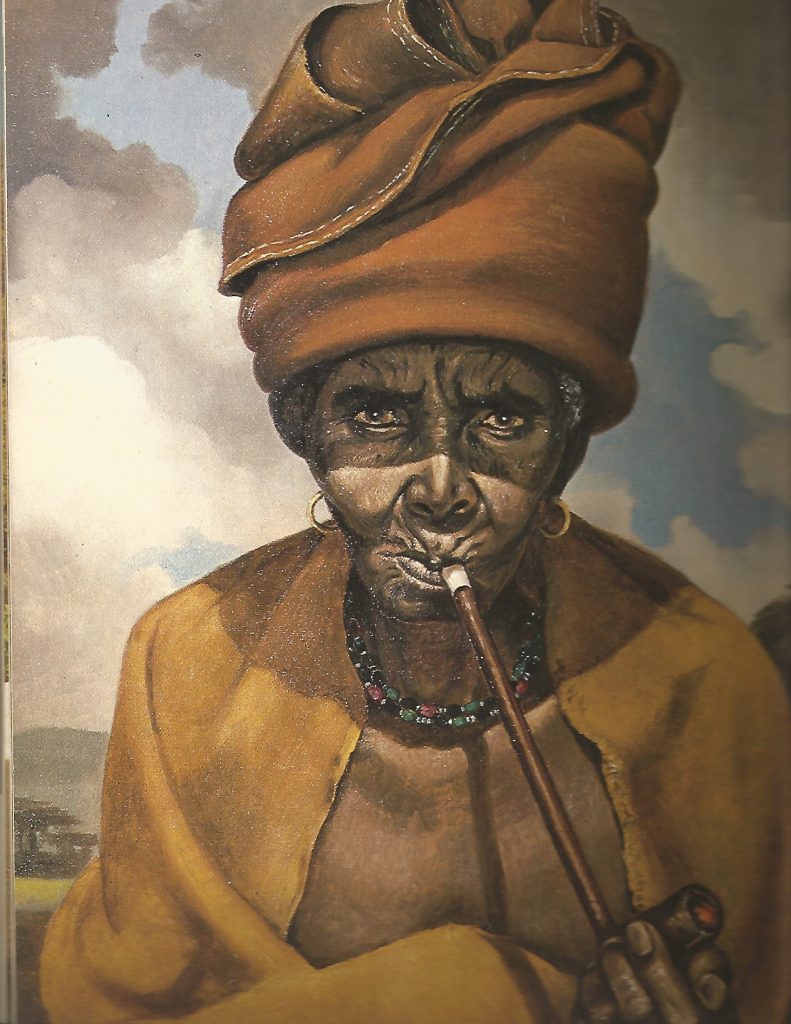 The Xhosa, the so-called red blanket people were the first bantu tribe to be encountered by the early white pioneers in their move, west up the coast of the Cape colony. Many of bitter frontier war was fought between them in the early days of the colony.

The Xhosa are of Nguni stock and the name is a generalized term covering the diversity of proud clans which make up this race. In their entire known history these people were never defeated or enslaved by any other Bantu tribe and repelled even the might of Shaka’s Zulu.

The Xhosa practice many rights and customs handed down through the centuries from father to son, mother to daughter, steeped in witchcraft and superstition they are the only Bantu tribe ever to have almost wiped themselves out through their ready belief in the supernatural.

Nonqawuse and the great cattle killings.

1 May day in 1856 young Xhosa girl by the name of Nonqawuse was sitting on the banks of a deep pool of the river known as the Gxara (the precipice after the deep gorge through which it flows) every day she went there to look into the waters but on this day she saw strange faces looking up at her and heard voices whispering to her. She knew they were the spirits of their ancestors and what they told her was disturbing. Their voices floated up to her promising that they would help the Xhosa drive the Europeans away, providing that as a sign of their faith the tribespeople would destroy all the cattle, sheep and crops.

Nonqawuse returned to the village in a state of great excitement. It was obvious to her family and friends that she had had an extraordinary experience. Her uncle Mhlakaza, a well-known witch doctor, was present when she told him what she had heard, and he was greatly impressed with the story of her vision. Mhlakaza at once hurried to the Galeka (great place) where he was received by Kreli, the paramount chief and his indunas (headmen) Oh Kreli! cried the witch doctor dramatically, ‘I bring you a message from the dead. The spirits of our ancestors cry for revenge. On the appointed day they will rise and help us to destroy the white man. But as a sign of our faith in them we must first destroy all our cattle and grain.’

Kreli was excited with the news. Believing this to be the way to exterminate the inveterate European foes, and unite all his subjects under him, he took immediate action. Throughout the land messengers were sent to the tribal leaders with the chief’s command and that all the cattle must be killed.

Great commotion spread amongst the Xhosa at this revelation. Men traveled far to speak with the young medium and her witchdoctor uncle. Crowds gathered to gaze into the pool and many claimed to have seen the faces of their own ancestors and to have heard them demanding total faith as the price for support from the supernatural world. Some watchers told with bated breath how they had seen whole armies of ghostly warriors waiting to emerge and eager for war and jeering at the timidity of the Xhosa.

The horns of oxen were said to have been seen peeping from among the River reeds while from watery submerged caves came a distinct bellowing and clicking of horns as of cattle milling around, waiting to emerge. These tidings of mystic sights swept through the country. There were those who even claimed to have seen returning heroes passing before them in a wild parade in the waves of the Indian Ocean, their plumes tossing in the spray of the rushing rollers until they sank back again into the depths. Some saw armies up in the clouds in glorious array of Shields and Spears eager to full upon the hated white man, their half-forgotten battle cries floating thinly down the wind as they whirled along.

A terrible, fatal fever of cattle-killing and crop destruction began. The great majority of the Galeka section of the Xhosa implicitly obeyed the dream voices heard by Nonqawuse. The Ngqika were one of the few sections of the tribe that kept their reason and remained aloof from the mass slaughter. The advocates of destruction said the Ngqika that they would die with the whites when the chosen hour of doom came; the sky would fall on them or a gale-force wind would rise and blow them into the sea.

It is estimated that 200,000 head of cattle were slaughtered by the fanatics and by the end of 1856 tribesmen were already dying of starvation. Those who had any stock remaining however, continue to kill them, undeterred in the hope of the promised rewards. New crops, they said, would blanket the earth, and innumerable herds would rise, lowing, to greet their earthly masters. Large cattle kraals were built by the optimistic people to house these animals, and huts were rebuilt and strongly thatched against the heavenly hurricanes that were to blow the disbelievers and the white men far out to sea.

For the believers the climax was to come on the 18th of February 1857. On that morning the sun would rise blood red in the West move around the Sky and set in the East, and hurricanes would sweep across the country.

It was a truly terrible dawn for many thousands of deluded people when they saw the sun climb from the Indian Ocean in the usual way. There were no armies, no heavenly winds, no lowing of magic herds. Broken and ruined, families were dispersed, and looting and fighting broke out over the smallest morsel of food. The old and the very young were abandoned to die and even skins and milk sacks were boiled and eaten. Entire families waited for death and others even more desperate turned to cannibalism.

Approximately 25,000 people died of starvation. The rest only survived through the compassion of more sensible neighboring tribes and the very European who were supposed to have been swept away. The main instigator of this horror, Mhlakaza, died of hunger but Nonqawuse, a discredited charlatan, was arrested by the European police and sent to the notorious Robben Island prison off Cape Town, later released she ended her days in obscurity on a farm near Alexandria Her name will be linked forever with one of the worst disasters suffered by any tribal people in South Africa the pool on the Gxara river with its smooth surface and wild surroundings remains as a monument to the folly of a nation. Nothing more is reflected in it now than the nodding aloes that bloom about it in winter.

These stories are copied from the book “Myths and Legends of Southern Africa” by Penny Miller and Published by TV Bulpin Publishers.