The Lion on the path

Once upon a time there was a man and his wife and they were working together in their fields. And the wife she turned to her husband and said, “Please”, she said, “I want to go and see my mother”

“All right”, he said. “You can go. But when you go, don’t you take the big path that goes down the valley. There are lions there. You take the little path that goes up over the hills that all the people take”.

So she said she would.

Then she picked up her child and slung him onto her back, put her pot on top of her head and off she went. Well, she hadn’t been gone more than – oh, a very short while – when he said to himself, “I do believe my wife is on the wrong path. Sure of it!”.

So the threw down his hoe, went off to his hut, picked up his little instrument of music, his Mbira, (you know, the little one he plays between hid hands), and off he went down the path. Now when he got to the place where the two paths divided, there – on the wrong path – were the footprints of his wife! And he said to himself, “Just like my wife!”

On he went as quickly as he could, down the valley, round behind some trees, and there – standing stock still in the middle of the path – there was his wife; and beyond her, about to spring, was a lion.

“I will play me notes

I will play my notes

These notes are mine of Nyamondo

I will play them to the Chief Ti-ndi-ndi

Thus and thus I’ll entertain him,

Entertain him with my notes Ti-ndi-ndi 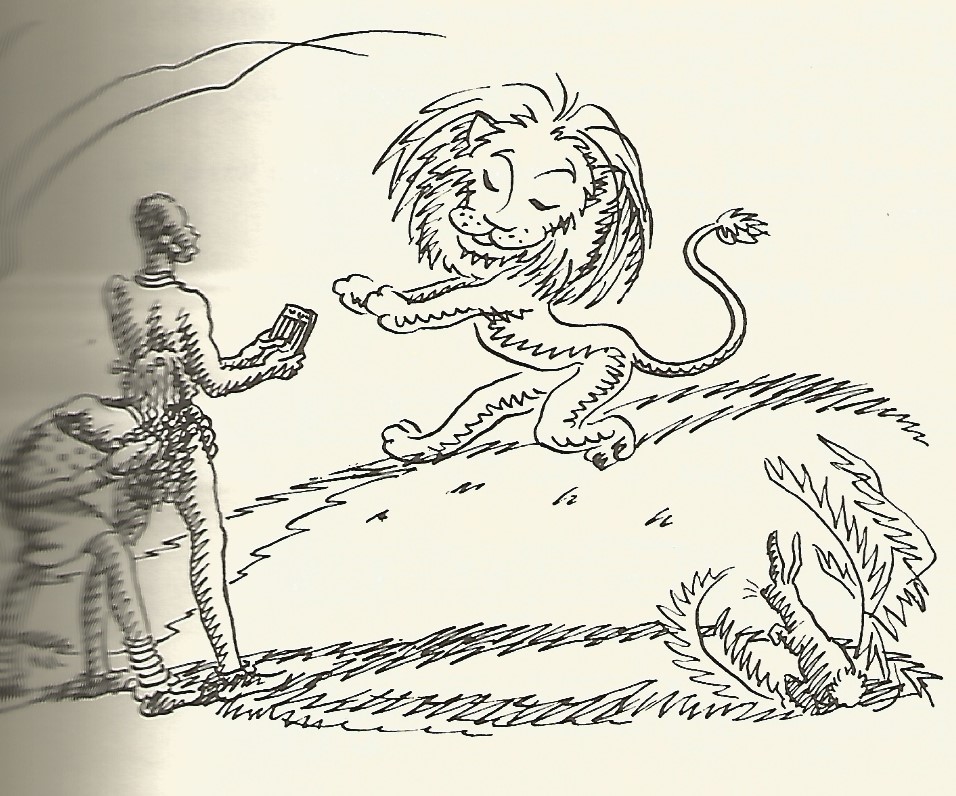 And the lion, hearing this most magnificent music, quite forgot about his dinner and began to dance.

Then the man quickly pulled his wife round behind him and went on playing.

Now, of course, the man wanted to get away from the lion; but do you know what happened? Every time he took a step back, the lion couldn’t hear the music and took a step forward. Now this went on for a very long time and he man was getting more and more tired.

(in a tired and desperate voice)

These notes are mine of Nyamondo

I will play them to the Chief Ti-ndi-ndi

And just when he felt he was altogether exhausted and he couldn’t go on playing any longer, a little voice beside him said, “Hey!”

He looked down, and there was – what do you think? – a rabbit!

And rabbit said, “Ss-siss! Hand it down to me!”

So without stopping playing for a moment, the man handed his instrument down to the rabbit, and he put up his paws and he went on playing.

(in a high squeaky voice)

I will play my notes,

So, quickly, they went ff together, back along the path towards their home; and rabbit watched them go until they were safely out of sight, and then, he looked for a place to escape.

There, away on one side, he saw a hole in the ground. And he said to himself, “That’ll do.” So quickly, he threw down the instrument and bolted down the hole. Well, of course, the moment the magical music stopped, lion woke up. And all he could see was a rabbit disappearing down a hole. And he said to himself, “Bless me!” he said, “I could have been sure that that was a Man playing”

And that was the end of that story!