Bushman story of how the wagtail got its necklace. 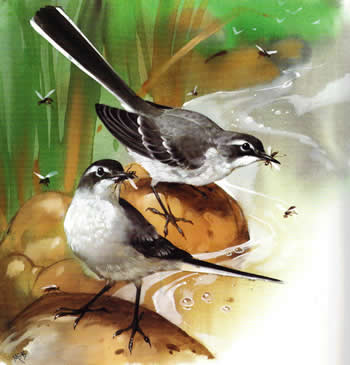 The Wagtail is one of our prettiest and most delicate birds, which has lived alongside man for many generations. The gentle Bushmen loved this bird too.

The friendship began long ago when the Bushmen lived in the Cape in low caves with rocky walls and sandy floors. The steep, rocky sides of the Kloofs ( Narrow valleys) sheltered them from the biting winds of winter and the scorching heat of the summer sun. These kloofs also held water and, in this dry land, it was good to have a constant water supply flowing by your door.

So the Bushmen lived in the Cape mountains, hunting and gathering roots, fruit and berries, talking and dancing and singing and painting.

They were happy people and very content with their homes and surroundings.

Then one day the sand-flies came. Thousands of them. Tens of thousands. Millions breeding by the running water – burrowing into the sandy floors of the caves – biting men, women and children. The Bushmen could do nothing.

The sand-flies multiplied and multiplied until whole valleys were plagued by them. The Bushmen held a council meeting and decided to move. All the caves were emptied of their scanty belongings. weapons, tools and cooking utensils were packed, and everyone was ready to leave. They intended to march out along the valley of the Olifants River into the vast Karoo. Their leader was making a speech, explaining to all why they had to leave, trying to prepare them for the hardships that lay ahead. Then he stopped talking and looked up into the bright blue sky with amazment. A large, black cloud was speeding rapidly towards where they were standing. Everyone watched in wonder and felt afraid,t then, as the cloud began to echo with sound, they realised it was a flock of birds.

These birds were small and delicate, with long tails which jerked up and dwn as they walked. Their backs were grey-brown, and their chests and outer tail feathers were white. The whole tribe watched in amazement as the birds settled by the running water and took over the kloof. They had made a long journey and they were very, very hungry. The sand-flies were just what they wanted! In their hundreds, they scoured the stream and the caves and the ground around the caves.

For three days they gobbled and pecked as the Bushmen looked on in amazement. By the end of that time, there was not a single sand-fly to be seen. Then the flock flew away as quickly as it had arrived, leaving behind them just one pair of birds. The cloud of tail-wagging birds continued on its journey and everywhere it settled – in every kloof, by every pond, by every stream – one pair stayed behind. So that is how the Wagtails, as we call them now, came to live all over our land.

It was a miracle, and the Bushmen were overjoyed at being able to remain in their homes. To show their gratitude, they decided to honour the Wagtails. But how does one honour a bird?

The Bushmen had no medals of honour and very little jewellery. The women and children wore necklaces made of small pieces of ostrich egg-shell. So it was decided that the women would make a similar necklace for the Wagtail and his wife. This was soon done and everyone was delighted. But, of course, it did not work. The necklace was to heavy for the birds. It caught in the bushes and once even broke in flight and was lost. The Wagtails were upset and the Bushmen were upset. They wanted to show their gratitude to these birds – but how? For long nights they sat in their caves and talked of nothing else. what could they do?

There was one Bushman who lived in a high cave overlooking the kloof, and he was a great artist. He painted in brown, orange and black – paintings of men, lion springbok, birds, insects and plants. His work was as beautiful in its delicacy and charm as any painting you have seen.

Why not,’ said one of the eldest Bushmen, ‘ask one of the artists to paint a necklace onto the Wagtail and his wife?’ Everyone agreed with enthusiasm.

The artist was approached and the problem explained. Gladly, he mixed a rich grey-black and painted a dark choker-necklace on the white chests of the birds. It looked beautiful. The Bushmen loved it and the Wagtails loved it. Mother nature looked down from her seat above the Great Karoo and she loved it too. She decided, there and then, that the collar would forever be the sign of man’s gratitude to the Wagtail. A symbol for all the help the Wagtail gives in controlling insect pests. And from that day to this, Wagtails have always worn a dark-grey choker-necklace. Next time that you see a Cape Wagtail, have a careful look at him. He never goes anywhere without his necklace.