Great White Shark viewing and cage diving has arrived in Port Elizabeth in the Eastern Cape! We are now able to offer a one of a kind, exciting marine safari to Bird Island on the north eastern coast of Algoa Bay as a full day excursion to this amazingly wild place. The day includes seasonal whale watching en route, Dolphins along the coastline as well as time spent with the endangered African penguins that breed on St Croix Island. 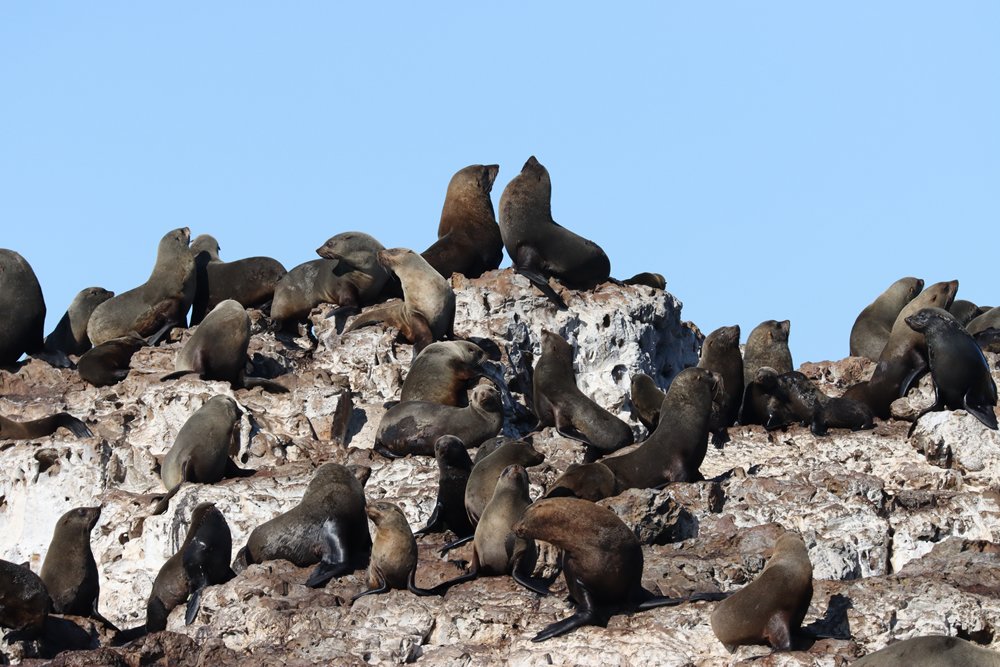 Black Rocks, one of 4 islands in the Bird Island group of islands, is home to an amazingly dense population of over 7000 Cape Fur Seals that breed on this fragmented fortress against the seas.The presence of these seals is the key that attracts a population of Great White Sharks to this part of the bay.

The first permit to watch these sharks from the safety of a boat was recently issued to local whale watching and eco cruise operator in Port Elizabeth.This has opened a welcome activity in our bay in the form of Great White Shark viewing and later cage diving at these pristine islands. Alan Tours in collaboration with the local charter company offers this marine safari of a lifetime.

Algoa Bay itself has a huge diversity of marine life, Seasonal Great Whales in the form of the Southern Right and Humpback Whales with the permanent resident, the Bryde’s whale forming the back bone of the whale watching, while the bay has become known as the Bottlenose Dolphin capital of the world with an estimated 22 thousand Bottlenose Dolphins using the bay as well as a permanent population of the endangered Humpback Dolphin and at certain time huge pods of the common dolphins can be seen harvesting the rich bait balls that are formed when the pelagic Sardines and Pilchards arrive in our Autumn months.

With this diversity in mind we meet you at your place of residence at 6:45 am and drive you to the small boat harbour in Port Elizabeth. Here we prepare for an exciting day on the waters of Algoa Bay. After the safety briefing, we set sail in a south easterly direction, pass Cape Recife and its Lighthouse.

Our route is designed to take us into the seasonal migration path of the Humpback Whales as they make their way either further north when they first arrive or on their return journey after they leave the northern extent of their migration to return back into the waters of the Southern Ocean and Antarctica itself.

These Whales will often be seen breaching, tail and fin slapping or simply cruising passed our boat providing us with amazing sightings of these gigantic creatures. 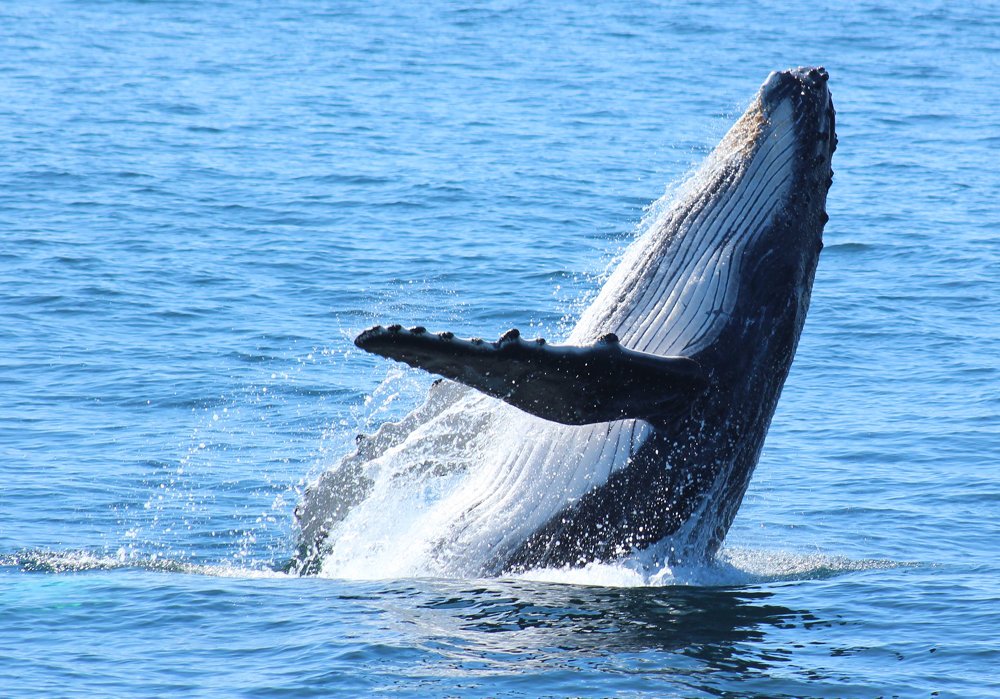 Once we get into the path of the migration, we change course and head north east, following their path as we set course for Bird Island. It will take about 3 hours at sea to arrive at the islands, taking into consideration time spent stopping to watch the wildlife en route.

On arrival at Bird Island we set anchor in the lee of Black Rocks and the seal colony for this is where we are likely to find the Great Whites lurking in wait for any unwary seals. It will take around 30 minutes for the sharks to scent the presence of the boat and come closer to investigate the intruder to their waters. While we wait, we take a light lunch and refreshment on board the boat.

Once the Great Whites arrive, there is a sense of excitement, intoxicated by the presence of these apex predators, we watch, as they circle the boat sometimes coming right up and touching the vessel; there is a focus, a sense of being drawn in, to the primordial power of these predators that find themselves at the very peak of the evolutionary scale. We spend between an hour to two hours here before packing up and running back home along the incredibly beautiful Woody Cape dune fields, a vast expanse of aeolian or shifting dunes, as we make our way parallel to the coast to the largest Island in the Bay, St Croix. It is while running along the coastline that we can anticipate spotting a pod or two of Bottlenose Dolphins surfing the shore break along the coast.

There is a good possibility of getting some great photo opportunities with these playful marine mammals breaching through the back of the sunlit swells. We soon arrive at St Croix with its breeding colony of African penguins and in most cases a pod of Bottlenose dolphins.

After staying at this island for a while, we make our final run back to the harbour after an exhilarating day on the ocean in one of the wildest places left on this planet.

After getting your shore legs back we board the tour vehicle and return to your overnight accommodation or your choice of restaurant for a meal and the end of the tour. 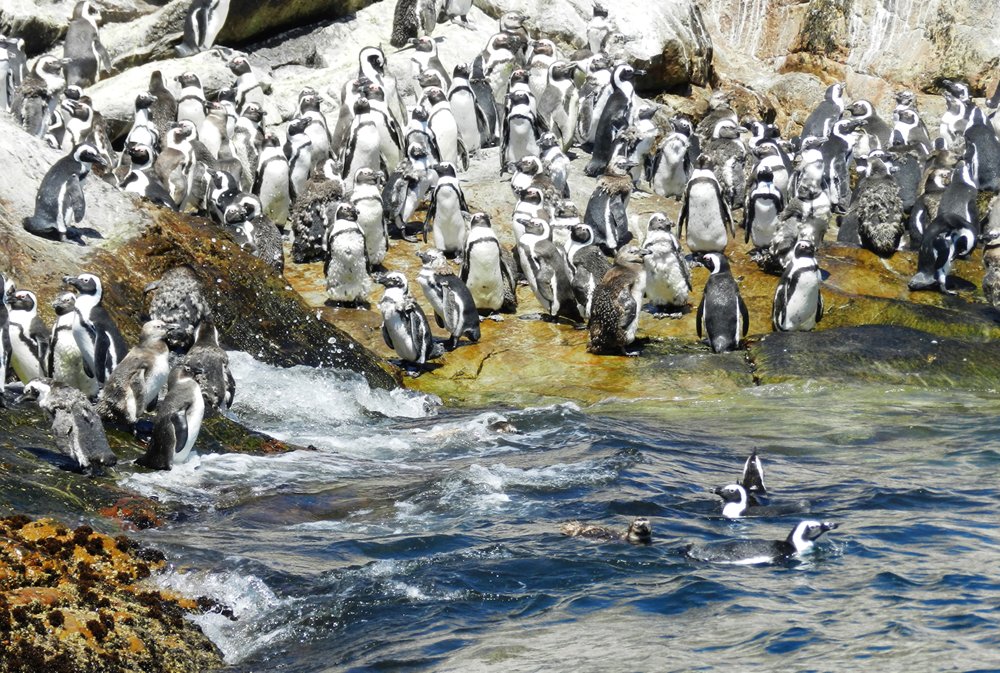 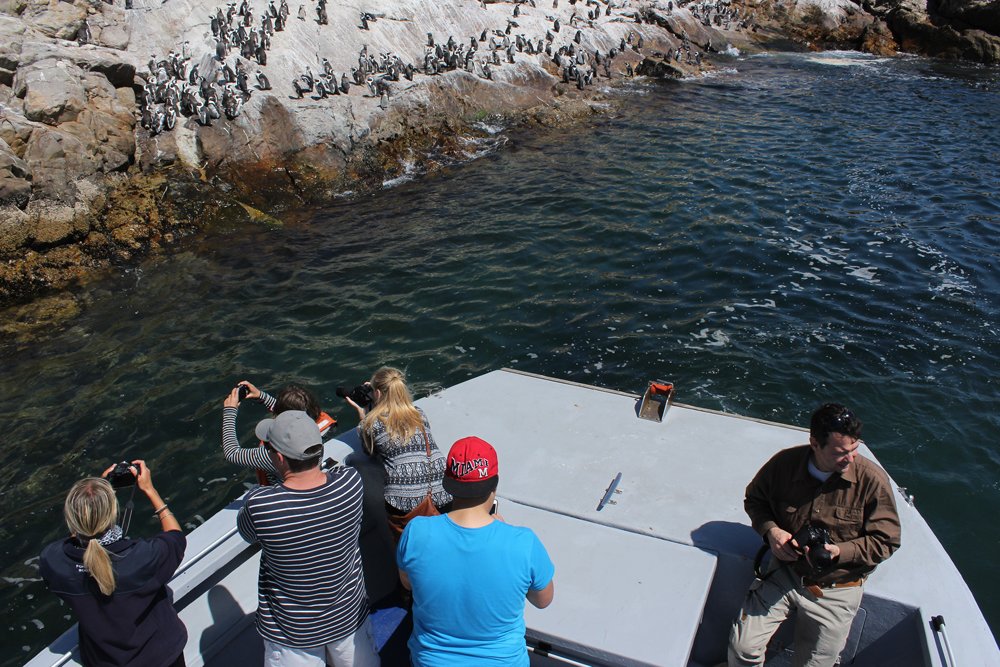 Tucked into the north eastern corner of Algoa Bay, the largest eroded bay on the African continent, is a small group of 4 islands collectively known as the Bird Island group. This group of islands are 62 Kilometers across the bay from Port Elizabeth and 8 km from the mainland at Woody Cape.

The islands, especially Bird Island, are steeped in myth and legend with the bones of many ship, the sailors that manned the ship as well as any number of crew and passengers who have come unstuck against the jagged, low lying islands that lie so close to the northern shore of the bay. 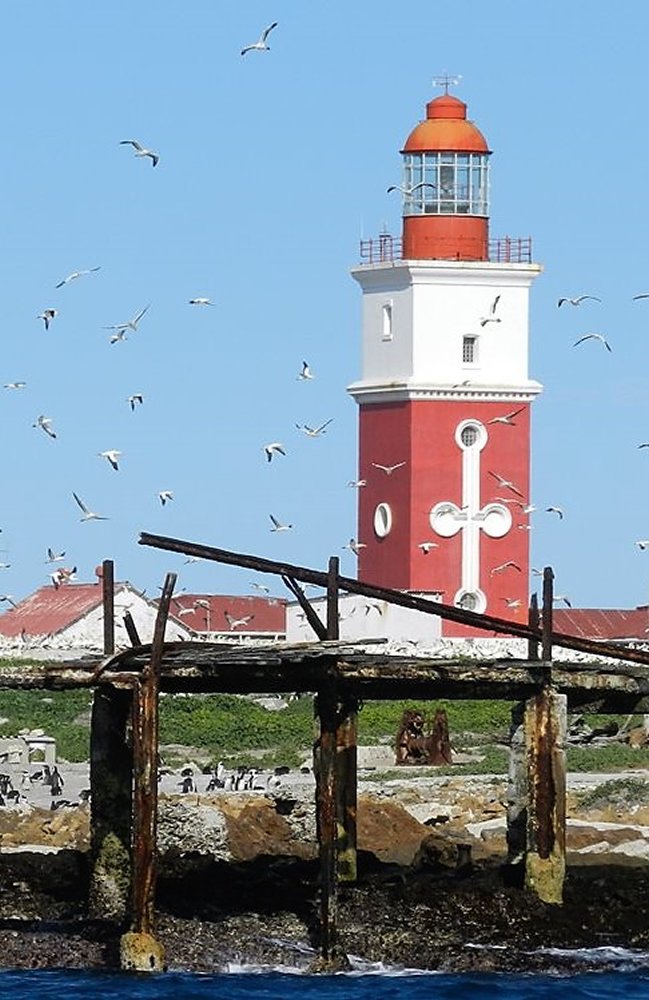 The proud red and white Lighthouse was built in 1852 and stands as a beckon of hope to guide shipping into the protected waters of the bay as well as to warn these ships of the immediate danger of this crusty group of islands.

The Islands themselves form part of the South African National Parks and are an extension of the Addo Elephant National Park and fall under the management of this massively diverse national park. Where in the past there were generations of Fishermen, Whalers, Sealers, Penguin guano scrappers and people sent out to collect penguin eggs for the wealthy tables in Port Elizabeth and further afield in Cape Town and even Johannesburg. Each successive wave of harvesters reaped the resources above and below the waterline, leaving the islands a poorer place each time.

A reprieve has now been issued to the islands where the steadying hand of science and the guardians of our natural resources have taken over to keep a keen watch on the area and so prevent to the best of their ability any further decimation of the rich resources that lie like treasure awaiting to be discovered by modern day adventurers on non-intrusive tours to discover this untamed corner of Africa.

The material from which these islands were formed was laid down around 500 million years ago when a rift valley started opening up when the supercontinent of Gondwana started breaking up due to tectonic plate movement. This rift left a shallow sea between the mainland, later Africa, and the retreating Falkland Plateau. This shallow sea was then filled with silicates washed down from huge mountains; taller than even the Himalayans are today by massive weather events that carried huge quantities of soil into this shallow sea. The basin filled up with these silicates and was once again forced up under immense pressure by the approaching South American plate that slowly swiped past the emerging African continent. Here the earth’s crust was forced up into a series of folds, creating what is today known as the Cape Fold Mountains. These mountains, formed in a west to east axis, stretch from north of Cape Town to just east of Port Elizabeth and it is from these weather resistant quartzites that the islands of Algoa Bay are formed. 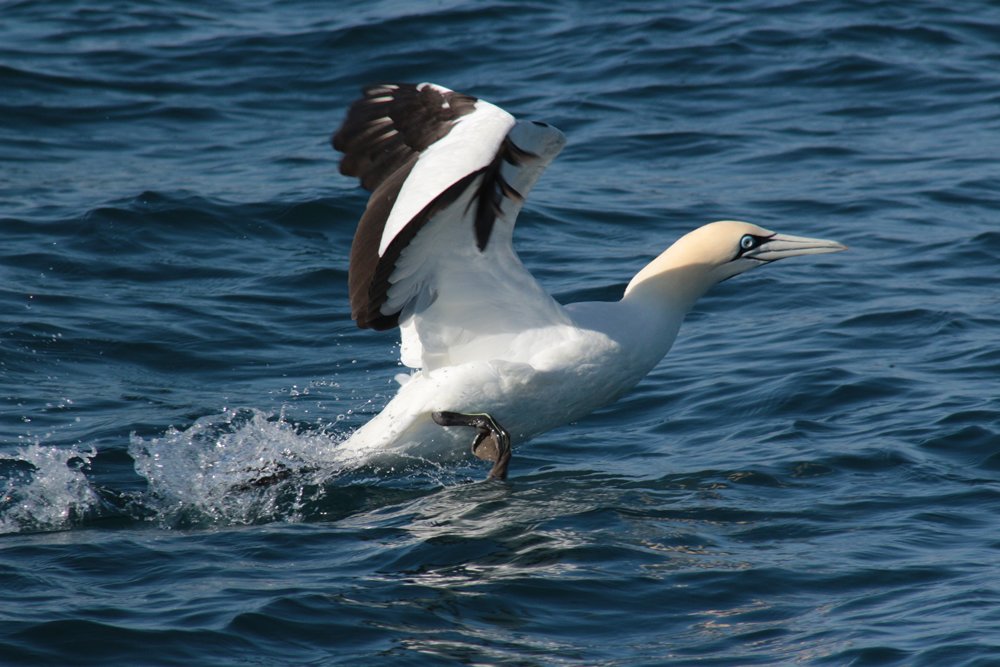 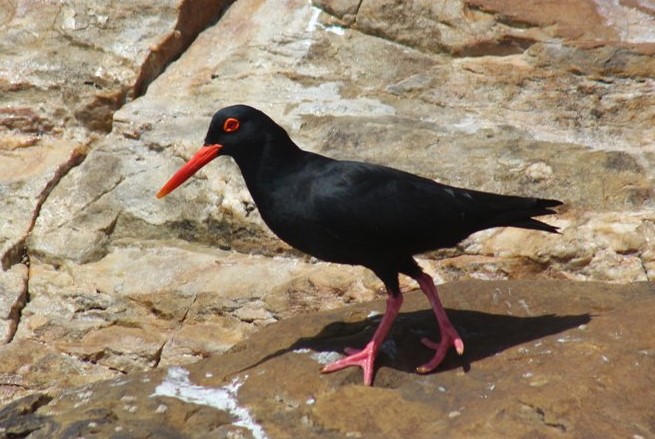 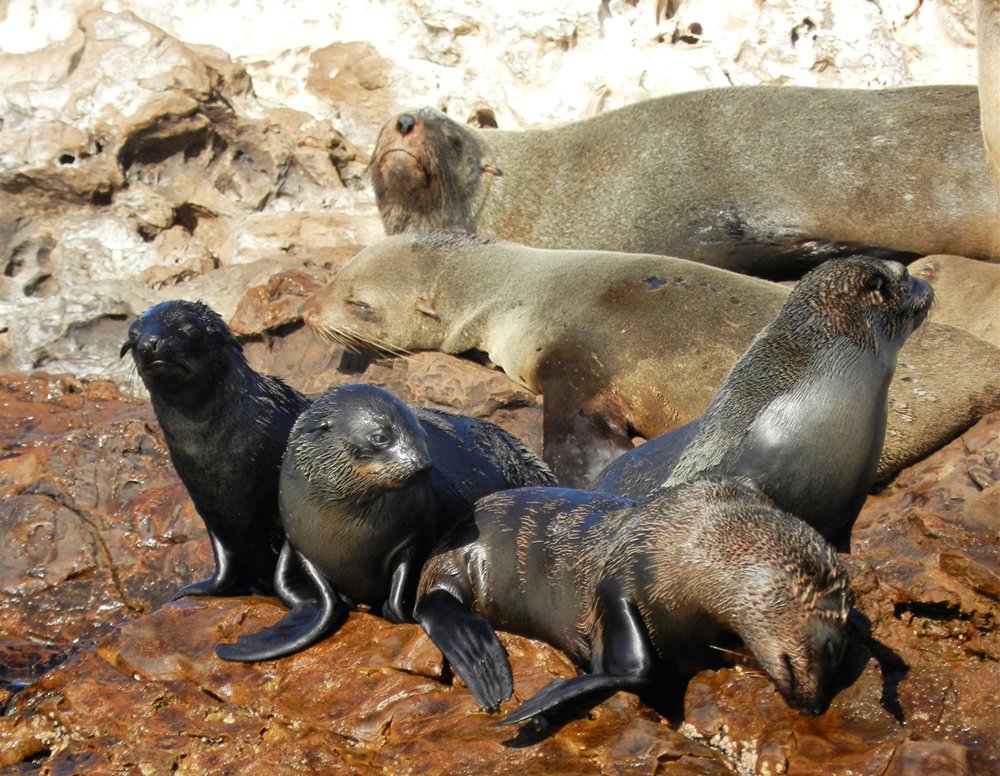