Echos of the past, an informative excursion into the culturally vibrant Eastern Cape district. Visit old fortified farmhouses, monuments, stone churches in Bathurst and Port Alfred. The Clay Fort, once the scene of the start of a war. Visit Fraser’s Signal Tower, a tiny field Hospital and many other places on the way to Grahamstown.

This is a full day tour of the historically significant and culturally vibrant Albany district in the Eastern Cape, South Africa. Learn the intrigue and hardship as the different cultures established themselves in these often unforgiving areas. Visit fortified farms, military outposts and battlegrounds set in remote localities in spectacular scenery while experiencing the growing pains at the birth of a new nation so many years ago.

8:00 am pick up from place of residence in Port Elizabeth. Orientation to the historical background of the area while circumventing Algoa Bay into the Albany district.

We discuss the part played by the advent of the different cultures starting with the first inhabitants, the early Hominines, the Bushmen and Khoikhoi, the arrival of the Portuguese explorers, the free Boers and the group who had the most significant impact, the 1820 Settlers who were given grants of land in this area.

We stop to look at a number of fortified farmhouses, outposts and military installations that occur throughout the area. Barville Park, a beautifully restored, fortified farmhouse and Lombard’s post, a tribute to an early farmer, pioneer and local Boer commander. 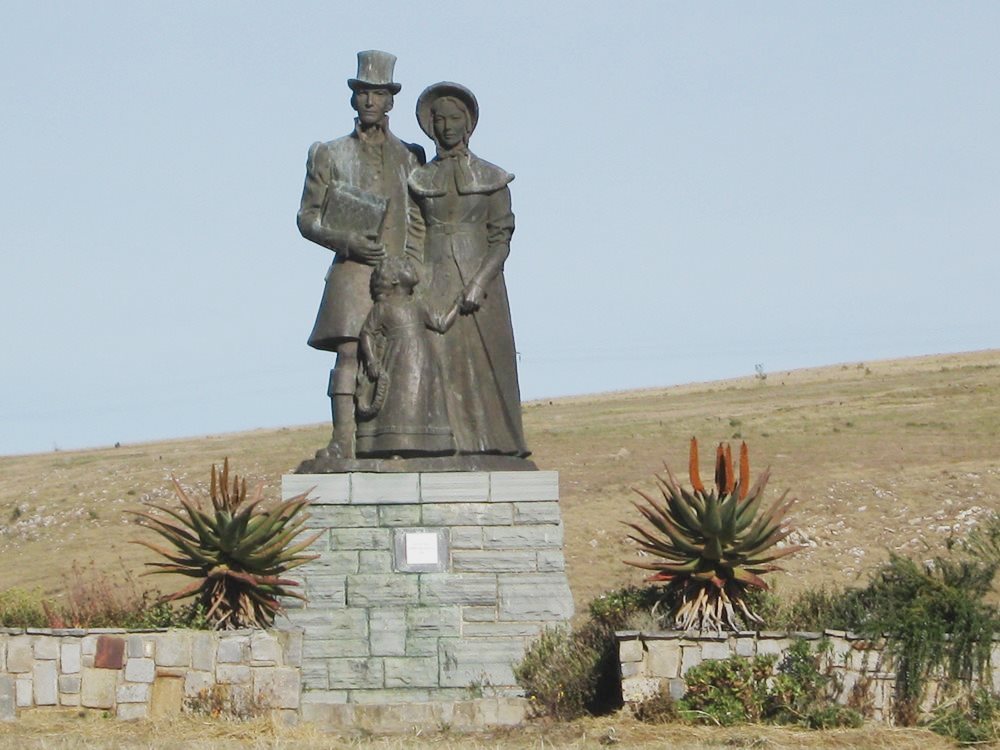 The settlers when under attack used these building as a refuge and link in the defense of the colony during various raids and wars. Peter and Helen Keeton with their children, descendents of the original settler family still live and work Lombard’s Post.

Next we head for the holiday village of Port Alfred on the mouth of the Kowie River. Here we visit the remnants of the settler’s Methodist Church built in 1826.

The church building was replaced twice owing to its destruction during the Frontiers Wars.

We stop for a quick lunch on the Banks of the Kowie River before departing inland to Bathurst.

Bathurst was the administrative centre for the 1820 settlers brought in to act as a buffer between the Cape Colony and the Xhosa pastoralists.

Many of the original settler houses and other buildings in the village have been preserved.

The Pig and Whistle, at the heart of the village, is reputedly the oldest existent pub in the country. Built in 1831 by Thomas Hartley, a blacksmith who came from Nottinghamshire.

Places of interest include Bradshaw’s Mill, a National Monument, built by the Settler, Samuel Bradshaw in 1821. 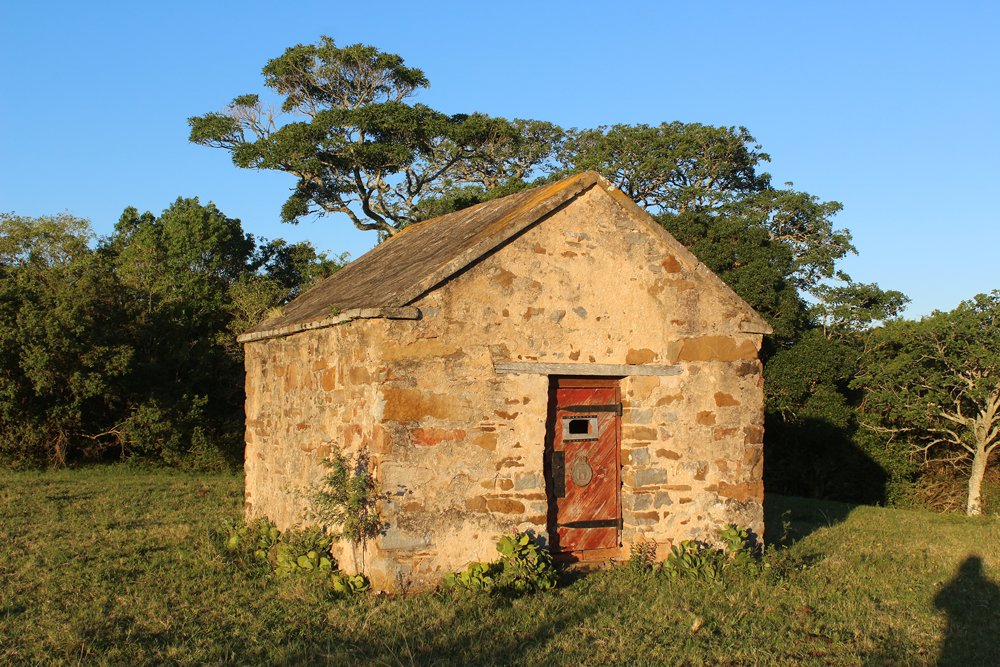 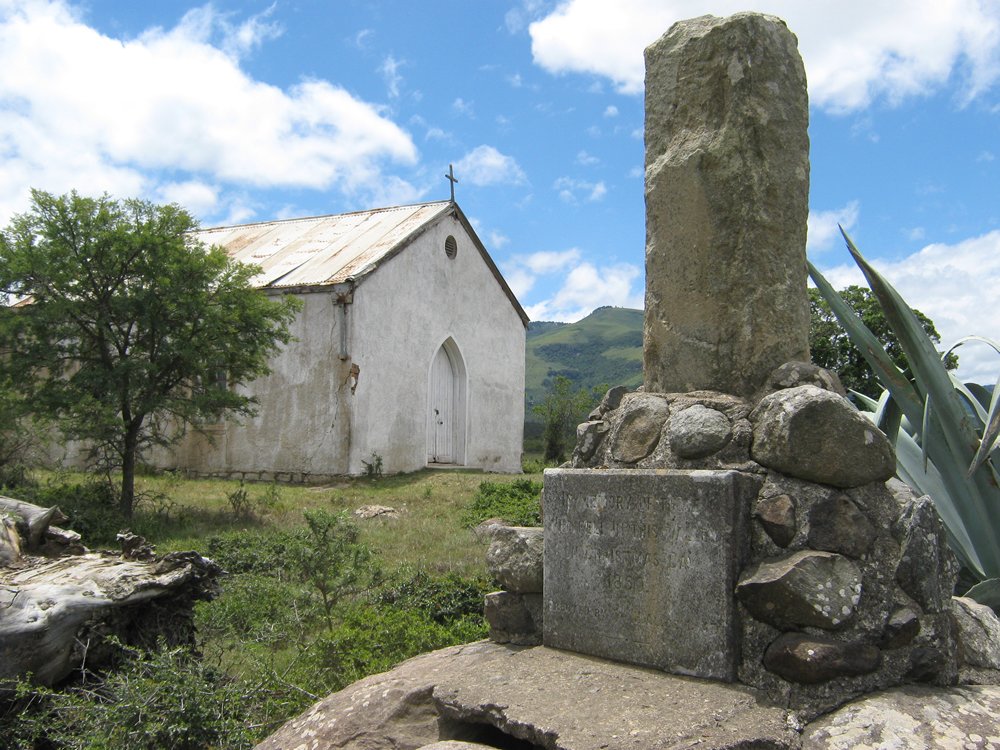 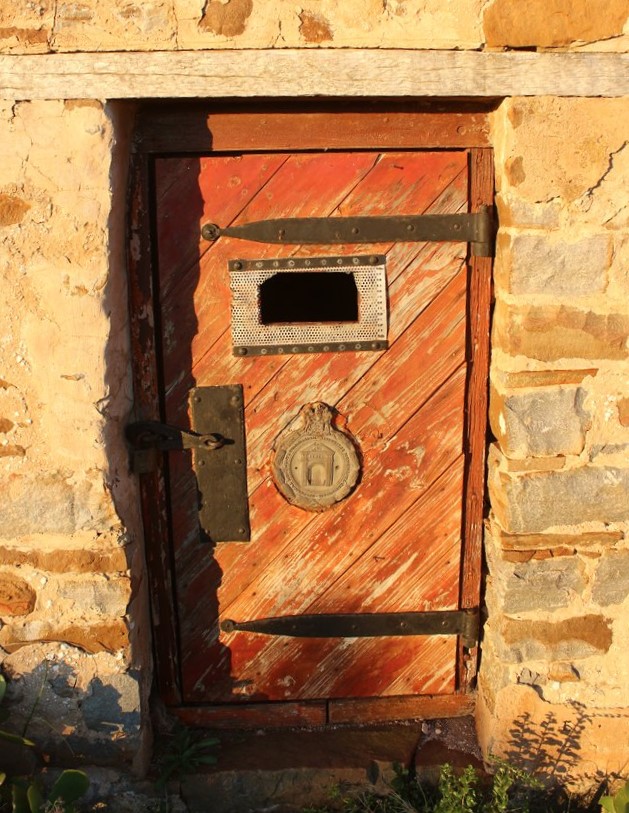 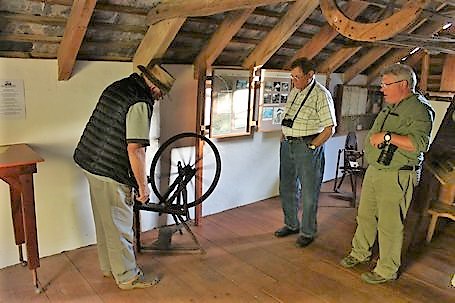 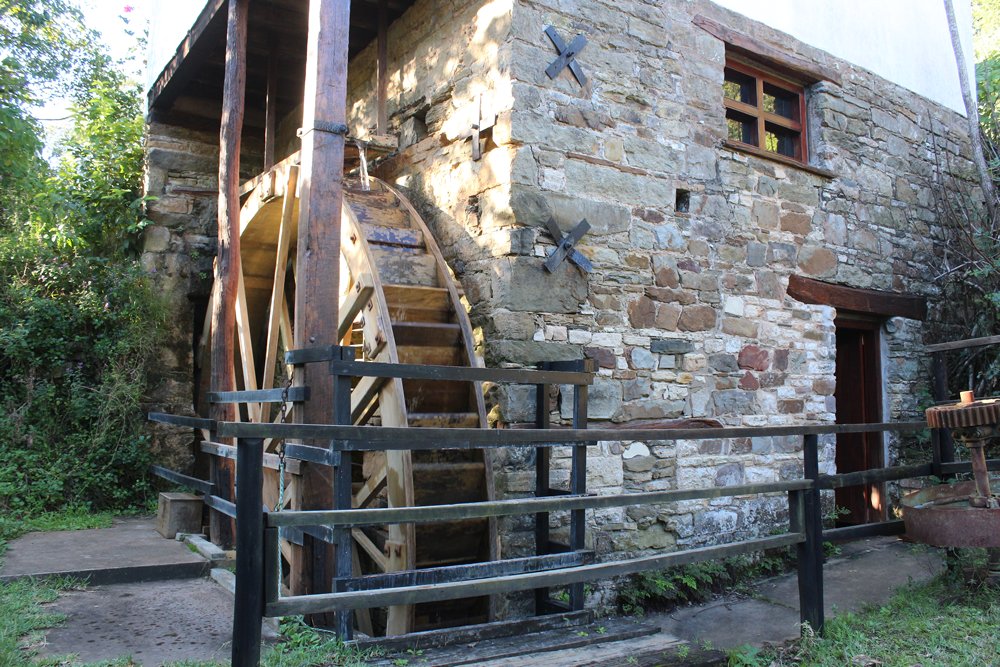 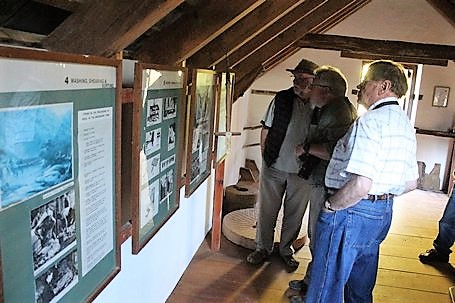 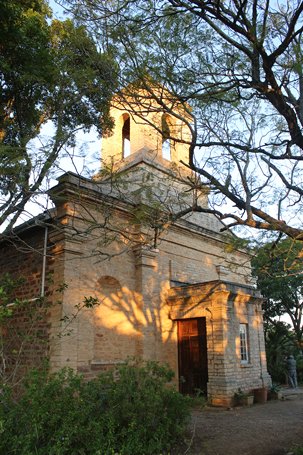 Wesleyan Chapel: Built by Samuel Bradshaw and opened in 1832, it was besieged in the Frontier Wars. It houses Jeremiah Goldswain’s Family Bible. Services are still held every Sunday.St John’s Anglican Church: Oldest unaltered Anglican Church in South Africa. A sanctuary in the Frontier Wars of 1834, 1846 and 1851 for hundreds of Settlers. First service held on the 1st January 1838. Look for the “church mouse” on the west wall!!

Bathurst Agricultural Museum: Discover how the past has influenced the future!

The Toposcope: This marks the spot where the 1820 British Settlers locations were surveyed. 57 bronze plaques record details of settlements. The stones in the wall are taken from ruins of original Settler homes.

The Clay Pits and Clay Fort
Leaving Bathurst behind we head towards the Coombs Valley in which many Settlers were given there allocated 100-acre farms.

The Clay pits produce Red and Yellow ochre (not clay) a highly prized commodities in the Xhosa history and culture. A settler, an Irishman by the name of Mahoney settled in the area. He denied the tribes people access to the pits thereby precipitating conflict. Mahoney was killed for his troubles.

A temporary post, the Clay fort was established to defend the pits. Two target Stones used by the military can still be seen on the hill. A Settler church here built in 1899 set on the hillside over looking the farm and above a settler house built by a certain Mr. John Brown. 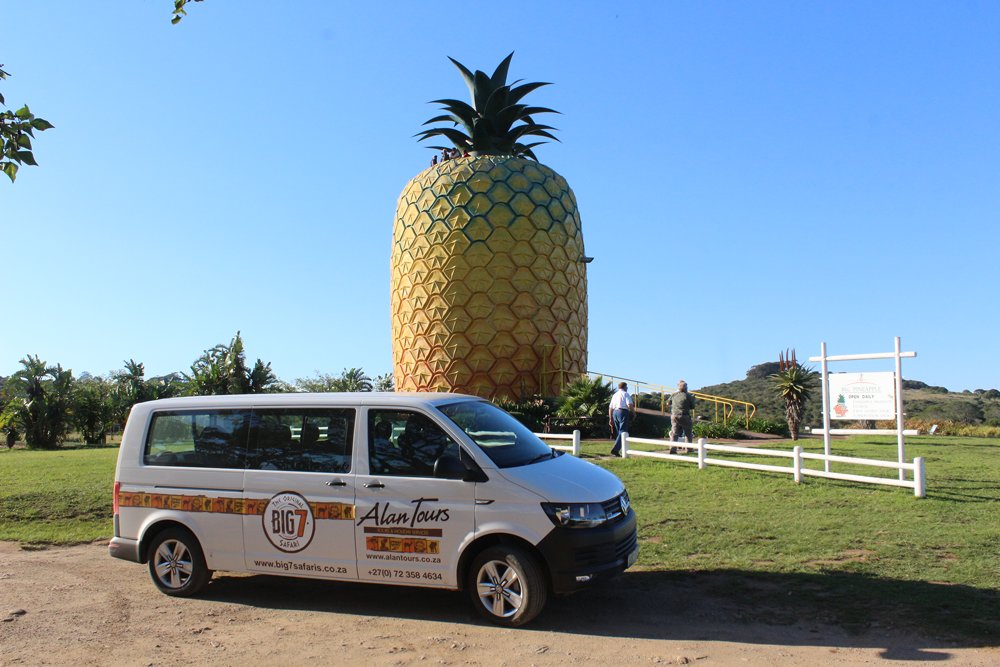 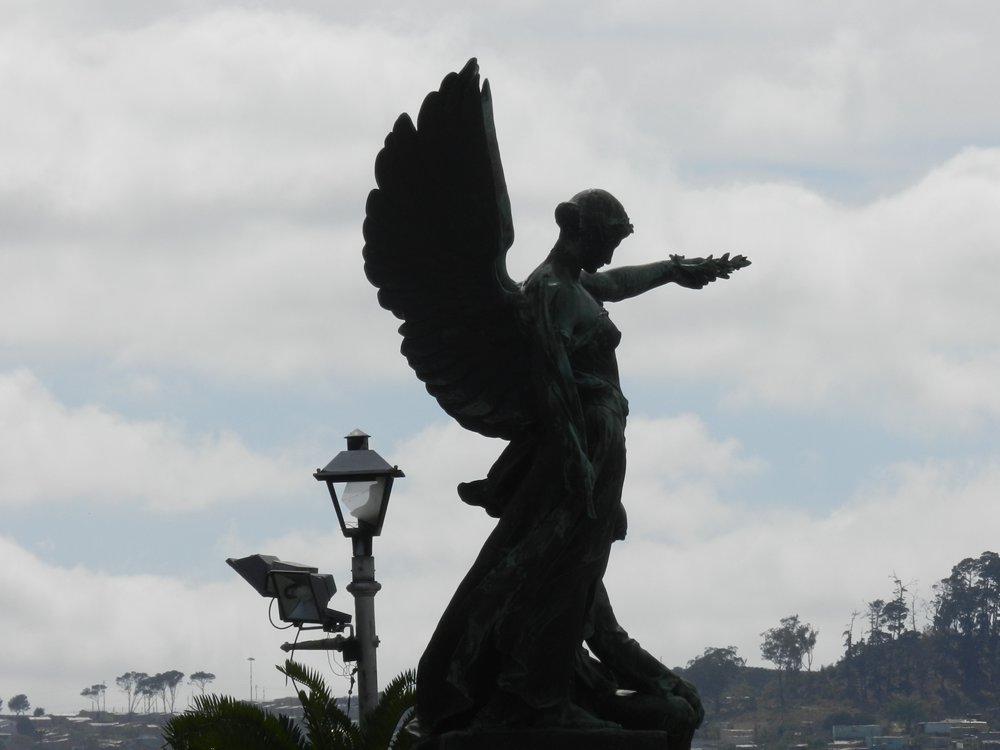 Leaving Coombs valley we make our way on to the N2 north of Grahamstown where we visit Fraser’s signal tower Built on this high ground in 1837.

This fortified tower was used to signal the colonial forces in Grahamstown when hostilities broke out in the Coombs and Great Fish river valleys.

A signal from this tower was relayed by way of the next one on Governor’s Kop and finally to Grahamstown itself. Purposely small and unobtrusive tucked into the hillside is a tiny little building that was designed as a hospital to treat 3 to 4 British and other casualties of the frontier wars. Today a Xhosa family who work on the farm occupies it. All of the original stonework, roofing trusses, doors and windows are in a fairly good condition.

Continuing on the N2 to Grahamstown we pass the site of Governor’s Kop on which the signal tower is situated, now on private property it is difficult to get to and we continue to Grahamstown.

Started in 1817 under the guidance of Colonel Graham and the site of any number of important historical buildings, churches (47, so called City of Saints) and the monument to the 1819 battle of eGazini (The place of Blood) which saw over 10 000 Xhosa warriors under Mdushane and the prophet Makana pitted against some 200 colonial soldiers and townspeople together with some 30 Khoikhoi Elephant hunters who came to the rescue of the colonial outpost who successfully defended the settlement under the command Colonel Wilshire. A battle, that should the Xhosa warriors have won, would have changed the face of politics in South Africa forever.

After Grahamstown we make our way back to Port Elizabeth stopping at the oldest farmhouse in the Eastern Cape, built by the Pioneer Jan Frederick Potgieter Assagaibosch Inn in 1717.