An altered state of normality
11 January 2022

We welcome an old acquaintance

It was with mounting excitement that we watched the increasing traffic of the local cruise liner What’s App group leading up to the arrival of the first cruise ship to dock in the Port Elizabeth harbour. The banter from the security personal and admin personnel while collating information around who was being registered to be allowed into the harbour grew in intensity as the date approached.
Keen anticipation of the imminent arrival of the of the first cruise ship since the devastating proclamation of the official state of disaster on the 15th of March 2020 was palpable, almost tangible. Here was the first passenger liner to enter our port with guests on board who were free to disembark and enjoy themselves since the closure of all ports of entry into South Africa, which led to the full blown lock down of the entire country.

We do or we did do a brisk business with the cruise ships that visit Port Elizabeth, which recently goes by the mostly unpronounceable name of “Gqeberha”. (Give it a try: Click–eh–beh–gha) Port Elizabeth, a name bequeathed to a fragile settlement on the wind swept shores of a bay in the then Cape province of South Africa by a grieving husband for his “most perfect of human beings”, his wife Elizabeth, who died tragically of a fever in a far off land across the seas and used with pride around the world for this once proud colonial city, the largest centre in the Eastern Cape.
We had taken bookings from passengers on board approximately 20 ships by March 2020, ships that were scheduled to dock in our harbour, while others were placed firmly on a future horizon. It was crazy once the truth of the matter finally sunk in. The truth being that the ships were all, each and every one of them cancelling their voyages to South Africa, including to our home port of Port Elizabeth / Gqeberha.

Everyone was scrambling for refunds of their deposits, but like most other companies we were simply not capable of making these refunds and instead like so many other enterprises we offered and still offer to provide the services we were contracted to provide by way of vouchers. So many kind and understanding clients have graciously understood the predicament, a predicament the entire tourism sector has found itself in, where these guests have decided to postpone their much anticipated cruise to Southern Africa. There must be many thousands of tour companies that find themselves in exactly the same situation as we find ourselves in. We are the fortunate ones; we still have a business, many of our colleagues have succumbed to the financial distress imposed by nearly two years without any income.

In an effort to offset the loss of deposits some guests have accepted our vouchers and passed them on to family and friends. Other have sold these vouchers onto people wishing to undertake the journey to this stunning country we call home once things return to a sense of normality; all be it a permanently altered state of normality.

The altered state of normality was brought home this morning when we went to the harbour to greet the first ship to tie up in Port Elizabeth since the pandemic struck all those many months ago.

Roll out the Red Carpet or a Tropical beach
With the arrival of the MSC Orchestra a beautiful modern passenger liner of 92 400 tons with a compliment of approximately 987 crew and the capacity to accommodate, in the lap of luxury just over 3000 guests. Andrew, our senior guide and I went down to the quayside to greet. Being quite early we were the first to arrive. We checked in at security and soon found our details on the sheets of paper supplied to the security officials. In we went seamlessly, it isn’t always like this believe me, after which we lined up our two converted Land Cruiser station wagons opposite the entrance to the quay at which the ship was docked, magnificent in the morning light.

We didn’t have any reservations from this particular ship but had decided to go down any way to smouse, to solicit some business from passengers as they disembarked and made their way on the quay to take in the sights of the city.

We were told at the second security check that the busses were going to be prevented from entering any closer to the ship due to the restricted space on the quayside, which were laden with literally kilometers of new rail tracks stacked upon each other. We had all heard this kind of story before so when we saw that the busses being let in, we followed suite and made our way to ship. 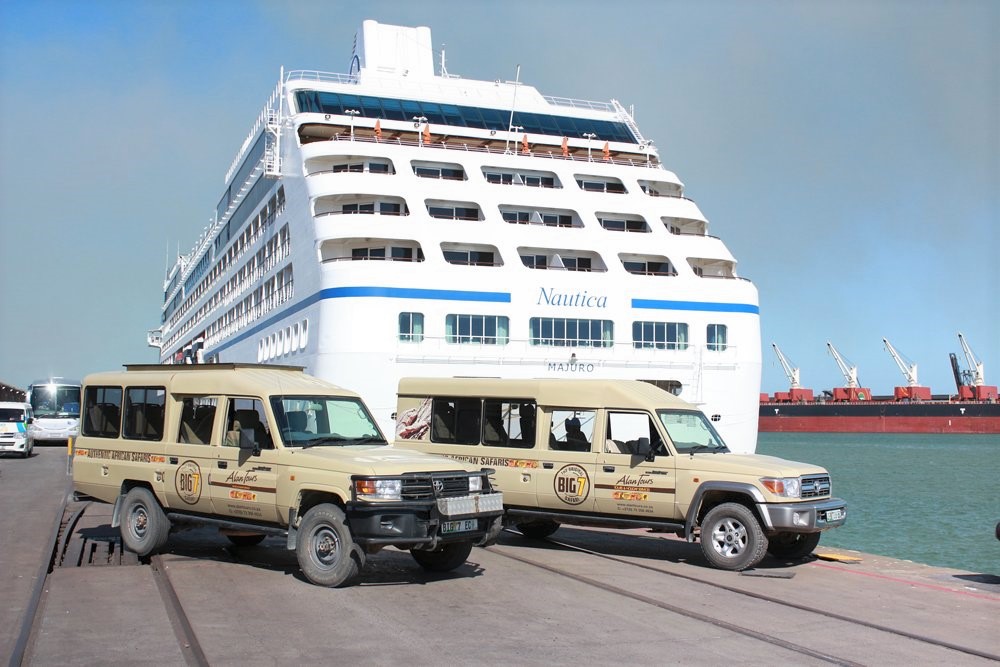 It was great to see all the old familiar faces, be greeted by security in the same dead pan; “what are you doing here” type of attitude which I always take as an invitation to engage with them. Great to see the normal state of near chaos our wonderful local tourism representatives always seem to be in on these occasions. On this occasion there seemed to be an extra sense of urgency as overweight, harbour officials in bright green reflective jackets were busily sweeping and picking up dirt and debris near the gangplank in preparation for a meeting of the ships captain and some of the city officials that would serve to celebrate the arrival of the first of hopefully of many more cruise ships to Port Elizabeth.

The harbour truck being used to carry the accumulated detritus of an unkept harbour was sent to get more labour and a wheelbarrow where they missed the fresh officials but were able to load a rather forlorn looking wheelbarrow. More picking up by the now sweaty, overweight officials who were joined by two equally overweight damsels in tight fitting pant suits from the local tourism department. The two ladies kept diving into the back of their panel van unloading brightly coloured deck chairs and finally an equally bright coloured parasol which wase set up to emulate a serene setting on a tropical beach right there in the industrial wasteland of the quayside, surrounded by stacks new railway lines, representing kilometers of forged iron ready to be lifted by industrial sized gangs of criminals once they leave the safety of the harbour. 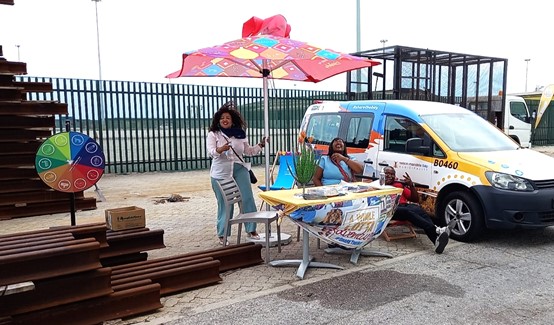 There is always a highly competitive jostling for parking on the quayside when these passenger ships arrive, everyone wanting to be noticed and provide the services to the clients as soon as they step off the ships.

It wasn’t long after we had found our parking spot that we were finally told by one of the ships representatives that, “Oh no” we were wasting our time here on the quayside, waiting for unwary passing passengers. Those guests who had not actually booked any tours with the Destination management company’s tour busses would be confined to the ship and not be let off due to new covid protocols put in place by the ship.
The “altered state of normality”

I wasn’t too disappointed; it was the first day of the 3rd and final cricket test match between the South African Proteas and the touring Indian cricketers. The three match series was level at a game each. Excitement was mounting.