Roy and Michelle from the UK decided to join us on our BIG 7 safari which includes a morning boat ride out to St Croix Island which is the largest breeding colony of African penguins on the planet and a well-known land mark of Bartholomew Diaz who erected a padroa in 1488 during his struggle to find the spice route through to India. We started out with the beautiful pink glow of the morning sun silhouetting the masks of the boats that were docked in the harbour. 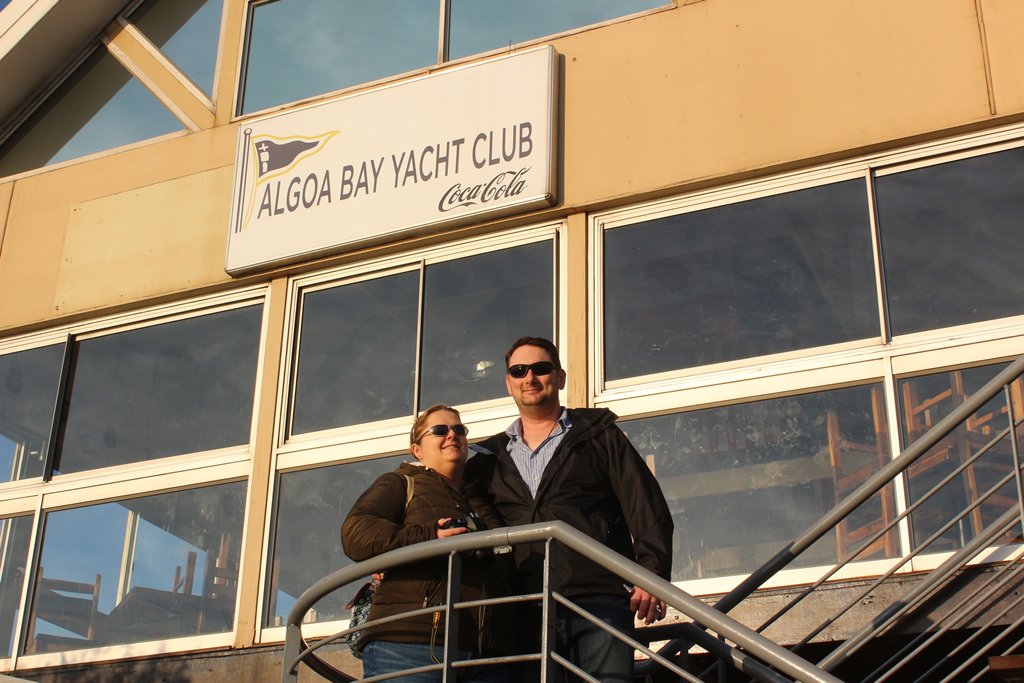 The smell of the sea air and seagulls calling is always a fond memory to have, especially, if you have never been out the harbour on a boat before. So with a bit of luck from Mother Nature we set sail with the opportunity of possibly finding whales, sharks, seals, gannets, dolphins, penguins and anything else the big blue sea can through at us. The next three months is a fantastic time of the year to search for the 37 different species of Whales and Dolphins along our coast but the most majestic will be the Southern Right whale and Humpback whale. There is nothing quite like having a 180 000kg animal tail lobbing and breaching within meters of you. Just to put the size into perspective, a fully grown bull elephant reaches weights of up to 7000kg’s. On this particular morning we had a slight glimpse of a Bryde’s whale moving a mere few meters past the boat leaving behind its swirly footprint caused by the motion of the tail. These whales are rarely seen so close to the shore as they prefer being a bit further out to sea.

After the disappearance of the “Bryde” we moved on to look for diving gannets and seagulls as this generally indicates bait balls which attracts species such as whales, sharks, penguins, seals and dolphins. With the wind picking up a bit this proved to be a bit of a difficult task but, St Croix never fails as on arrival to the island we were greeted by dolphins and penguins.

We floated around the island for a good 45min or so having a few refreshments and taking in everything that the island had to offer before heading back to land. 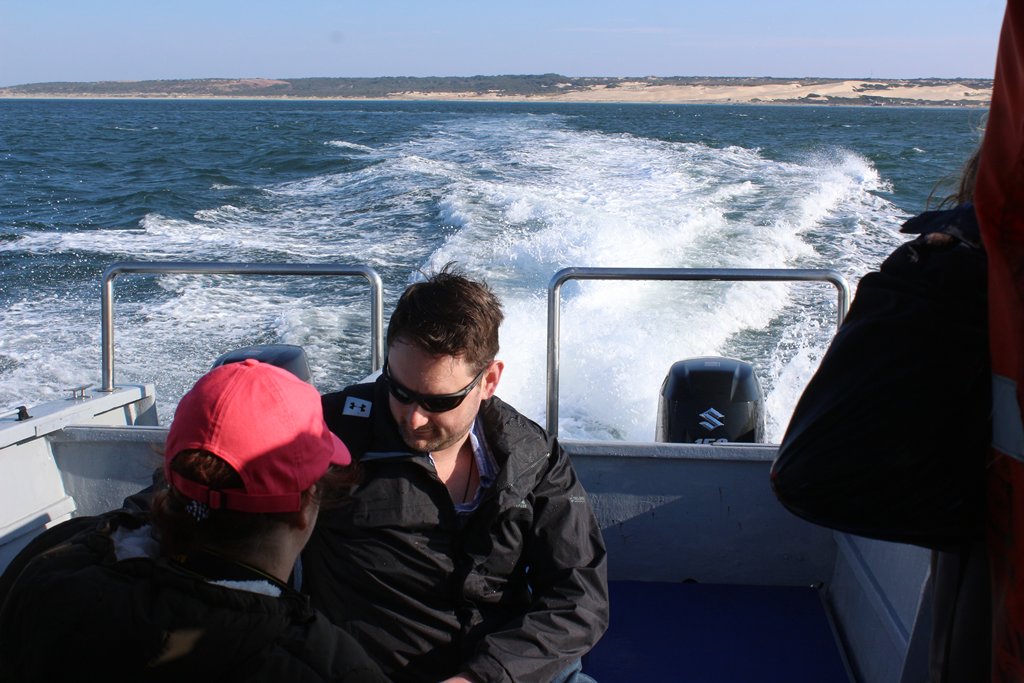 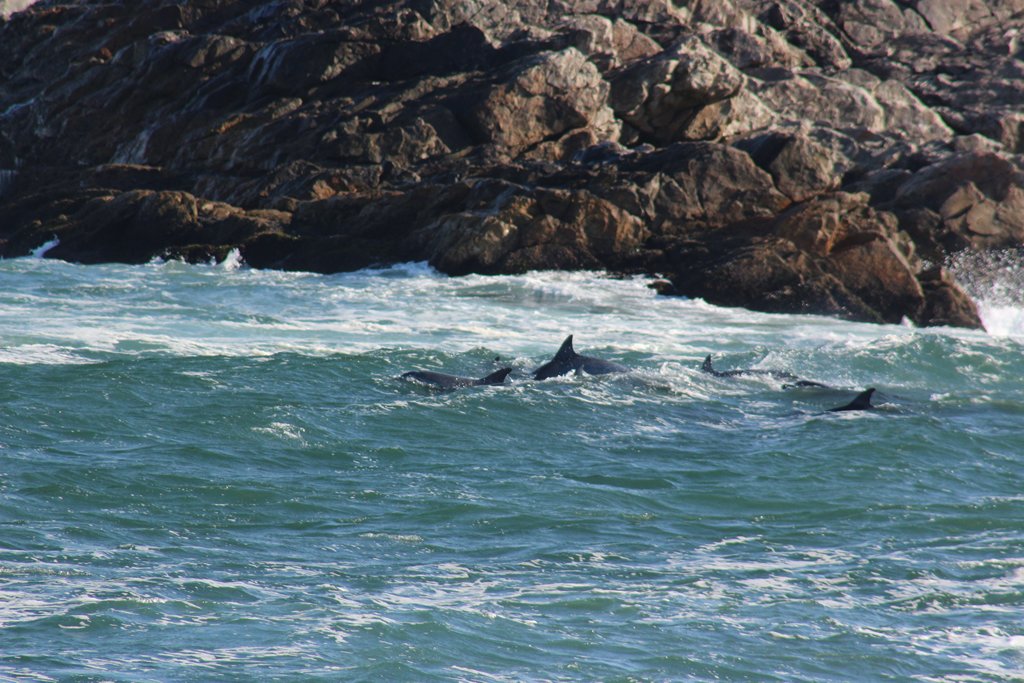 On return back to the harbour our tummies were ready to take on a good hearty meal overlooking the harbour activities from a few metres above sea level. After lunch we headed off to Addo Elephant National Park. Although elephant is always a high priority when it comes to visiting the park, we were on a special mission to try find some lion. Only having roughly 4 hours to cover over 24 000 hectares we knew we were in for a challenge. We entered the park at the southern Matyolweni gate which is the newer part of Addo situated outside Colchester and made a joint decision to exit at the most northern main gate which is the older section. So we had one swoop to make it count as back tracking was not an option. Ngulube (meaning warthog) loop is one of my favourite loops as it has always produced good sightings and on this particular day it was no different.

Two young elephant bulls made their presence known by owing the road and expecting us to move out their way while they made their way to the Ngulube waterhole. Our vehicle being slightly smaller and outnumbered 2 to 1 I gave them their space as any person with a love for life would. This was an amazing sighting to get the afternoon going and for the next 2 and a half hours we drove north with various plains game sightings and an abundance of elephant. 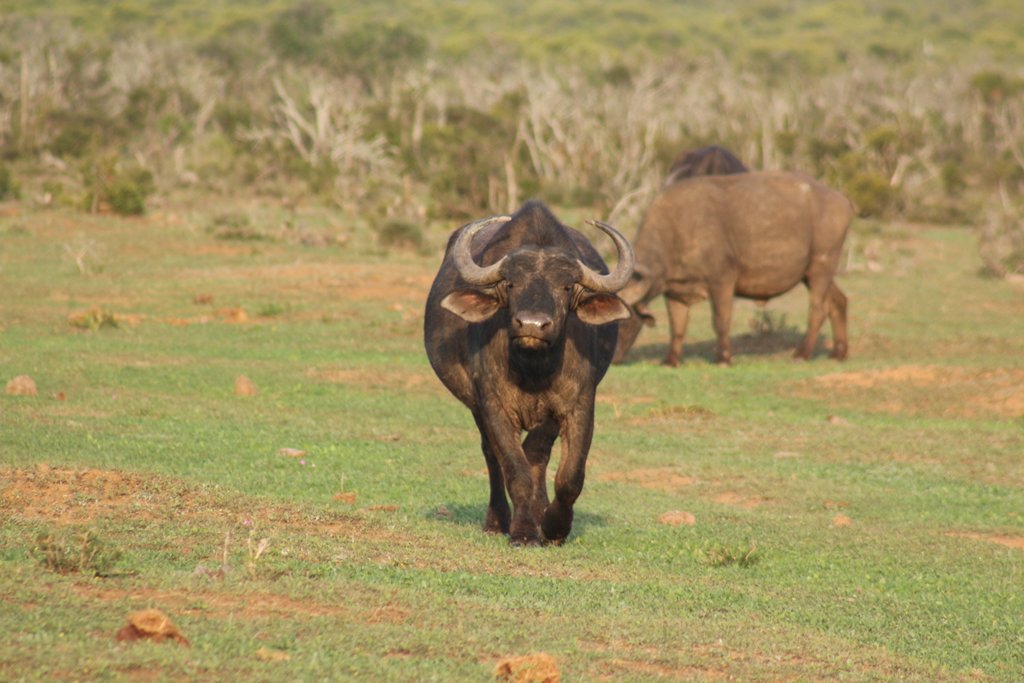 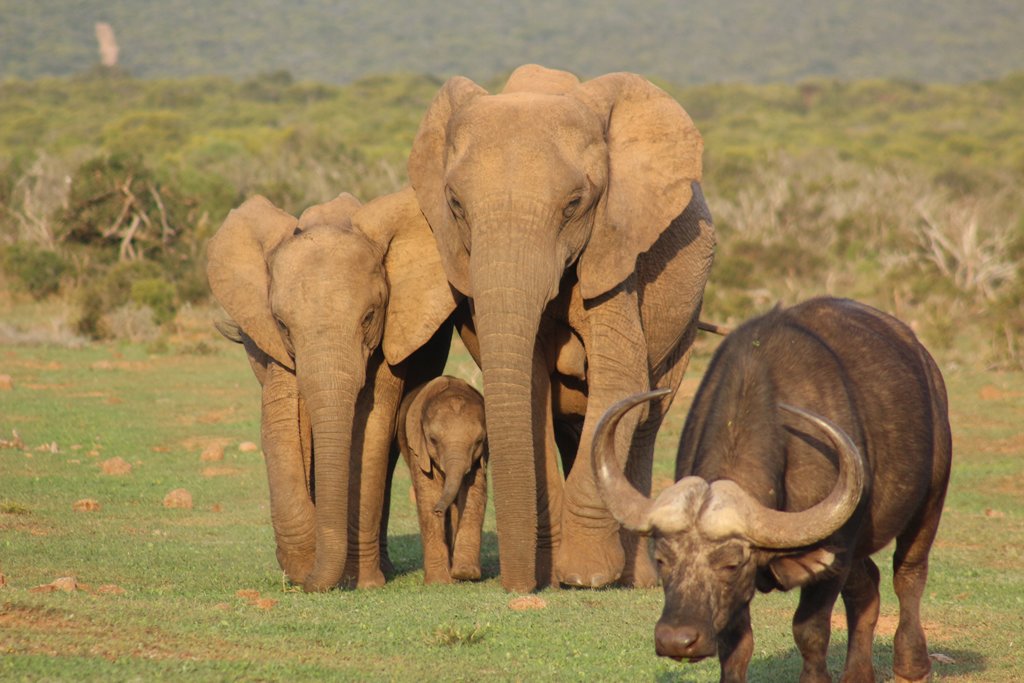 At around 16:00 we found ourselves sitting at on the northern side of Mpunzi loop just south of Hapoor waterhole watching a herd of ellies scratching out grass with their front feet, shaking off the sand and eating it, when out of the blue a herd of 80 strong buffalo come out the thickets from our right. It was easy to pinpoint the “Pathfinder” as she will be the big female leading the way to water. Without hesitating the herd passed our vehicle along the front and back making their way to quench their thirst. After spending an amazing 30 minutes with what unfolded in front of us we decided to move on with the hope of still possibly finding lion. As we made our way further north around Rooidam Roy spotted something out of the corner of his eye. It was two small hyena cubs basking in the last bit of sunlight just along side their den sight. One has to be extremely lucky to find Hyena in the park as gate times don’t really allow for it but, Mother Nature was favouring us today. Not fazed by having us around one of the little cubs just lay there and allowed us to take in his beauty while the other little guy decided that this isn’t really his kind of get together so retreated into the den. We must have spent about 20 minutes with them in the hope that they would come out of the den site for some water before their nightly activities. That didn’t really materialise but it was a fantastic sighting none the less. For somebody that ventures into the park on a regular basis you seem to really appreciate the special sightings that come your way.

Now with about an hour left before the gates slam shut on us we came to grips with the fact that lions were not a gift that would be giving to us on the day and that having a great hyena sighting was our climax before exiting the park. With this in mind we set off to the main gate. With a bit of time to spare we thought we would do one more loop around Domkrag dam in quick time without exceeding the speed. (Domkrag, “meaning, mad power” is named after a huge leopard tortoise that used to find his way underneath small motor vehicles and lift them slightly. Sadly he saw his end by landing in a aardvark hole). Losing light quickly, we were down to our last inch of luck but as we took the final corner around the Nyathi camp entrance before heading back, lying in the road were two magnificent male lions. We had about 15min to spend with them before having to make an exit for the gate. Roy and Michelle have never seen lions in the wild and it just goes to show that a day in the bush is never over until your vehicle exits the gate. Happy vibes and persistence really paid off. Our day was complete!

Words and photographs by Luke 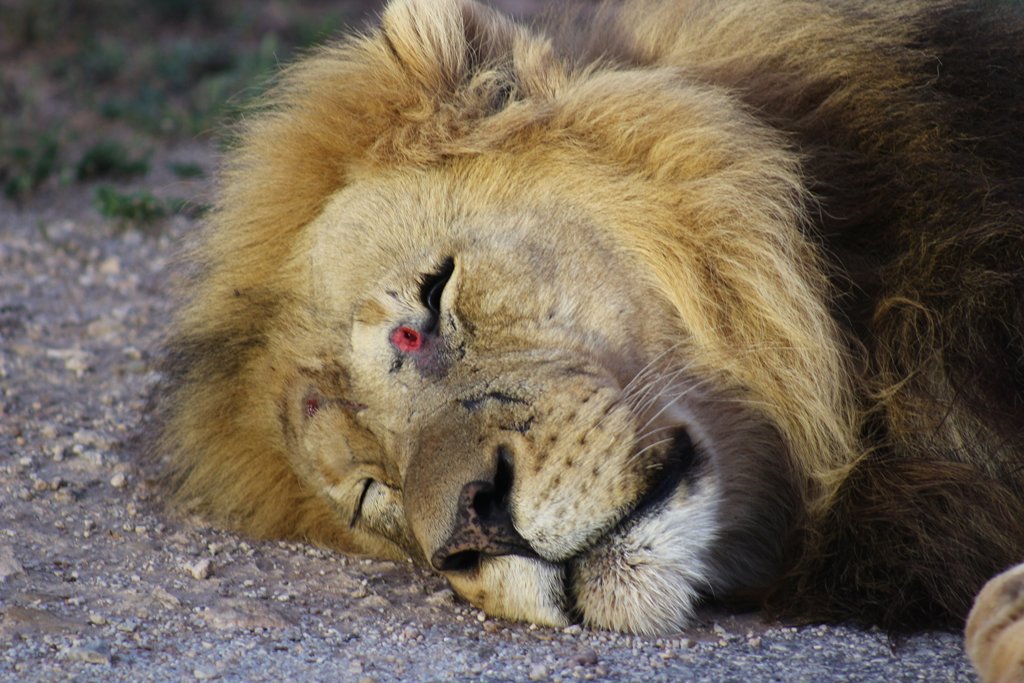 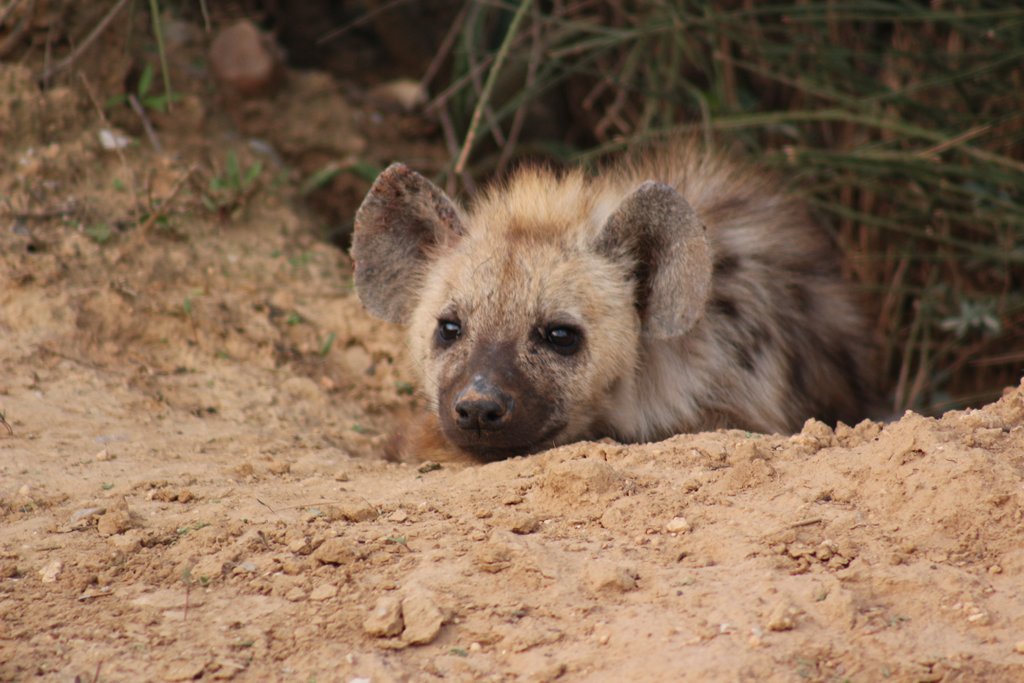 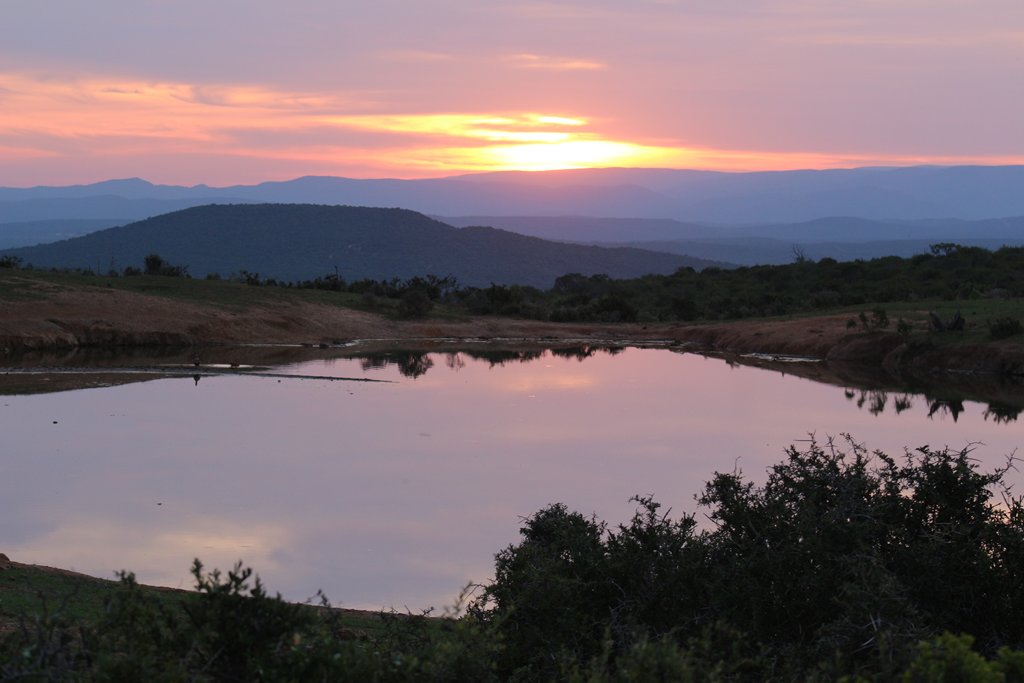