Bird Island to St Croix on a rough day 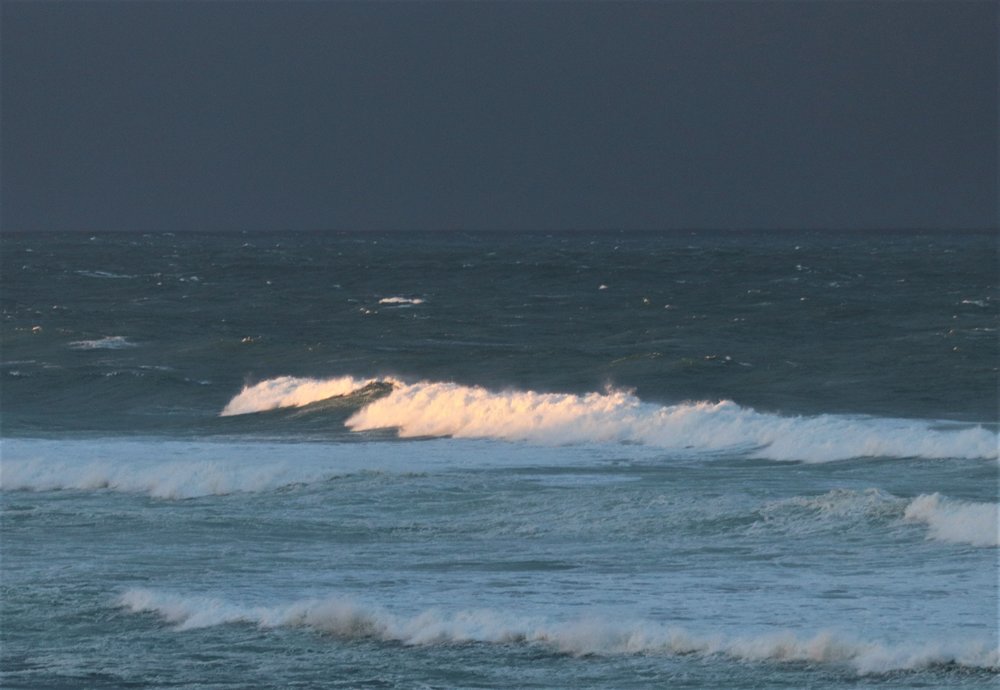 It all started pretty early at around 5.30 am and for anyone who gets up at this time in the middle of winter you will be well aware that for all intents and purposes it is still in the middle of the night.

I had been invited to crew for a Raggy Charters trip to Bird Island for what turned out to be a group of veterinarian students out from Glasgow, Scotland to gain experience on one of the private game reserves near Port Elizabeth.

Once the sun started to rise above the horizon there was a beautiful window of luminescent light that shone like a spotlight on the breaking waves in front of our house. The scene was amplified by the dark back drop of heavy storm clouds out to sea.

Piling myself, cameras, extra clothes bag and other paraphernalia required to survive a day on the ocean into the Land Cruiser, I made my way to the harbour to rendezvous with Lloyd and Jake, the crew and passengers to board the new Butt catamaran “My China” that Raggy Charters had recently launched and to set off along the Port Elizabeth shoreline towards Cape Recife.

Angelika and I had taken a serious look at the weather report where a 24 knot westerly was predicted but in mitigation this was predicted to abate later with the promise of a calm day at sea.

There were a few rain squalls predicted and having seen the thick band of dark cloud out to sea from Seaview where we live, I was in no doubt that we could get a little wet on the trip.

It went well, calm as cake icing until we broke out of the shelter afforded by the Cape Recife peninsula, after which we really knew that we were at sea. The new boat “My China” was an absolute pleasure to be in and was more than capable of handling the seas we found ourselves in. It felt invigorating and judging from the amount of laughter and giggling on board the Scottish students found it equally exciting.

There was quite a swell running, where we were doing about 5 knots up the swell and 25 knots running down with the swell. We made our way to Bird Island running passed the vicinity of the Riy banks a popular diving and deep sea fishing reef at around 30 meters below the surface until finally through the haze and the odd rain shower we could make out the faint silhouette of the Bird Island lighthouse, what a beacon of hope this light must have been for so many sailors navigating around this sometimes treacherous coastline. 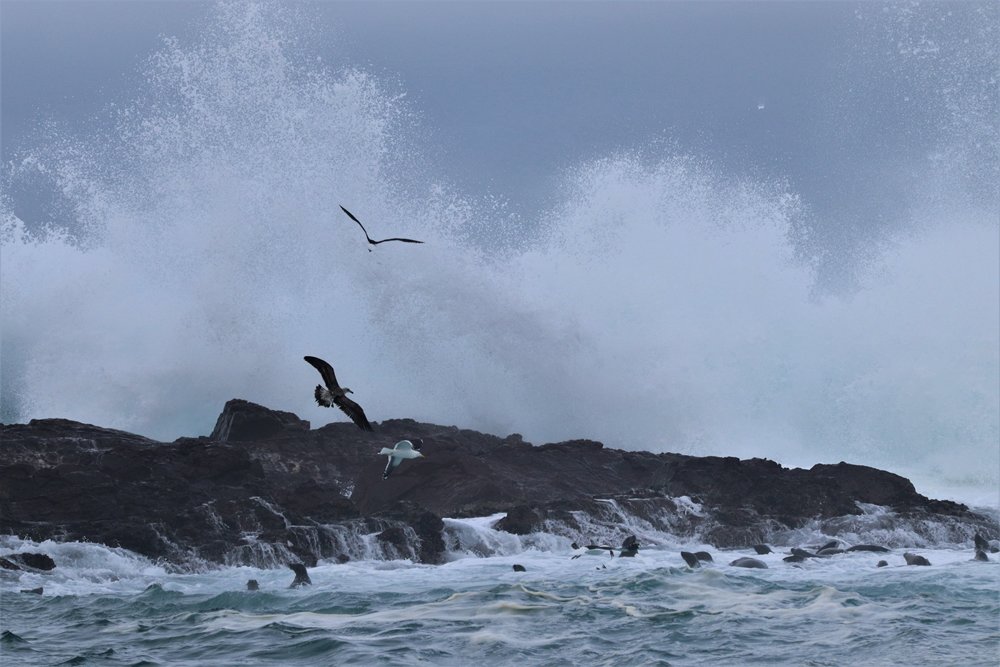 As we approached closer to the islands, we could make out the dark rocks and the rim of white turbulent break water around the rocks. Approaching from the south west Lloyd skillfully navigated the boat between the swells, the breaking surf around Black Rocks and into the calmer waters on the inside of the reef and there all of a sudden we could see hundreds of Cape Fur Seals in the turbulent waters on the inside of the Black Rocks Islet but because of the size of the swell breaking over the rocks only the large males or Bull fur seals were literally able to stand their ground on top of the rocks as the great ocean swells broke over them, this is not surprising when one considers the weight of the adult bull at around 200 to 350 kgs while the females average out at around 60 kgs. 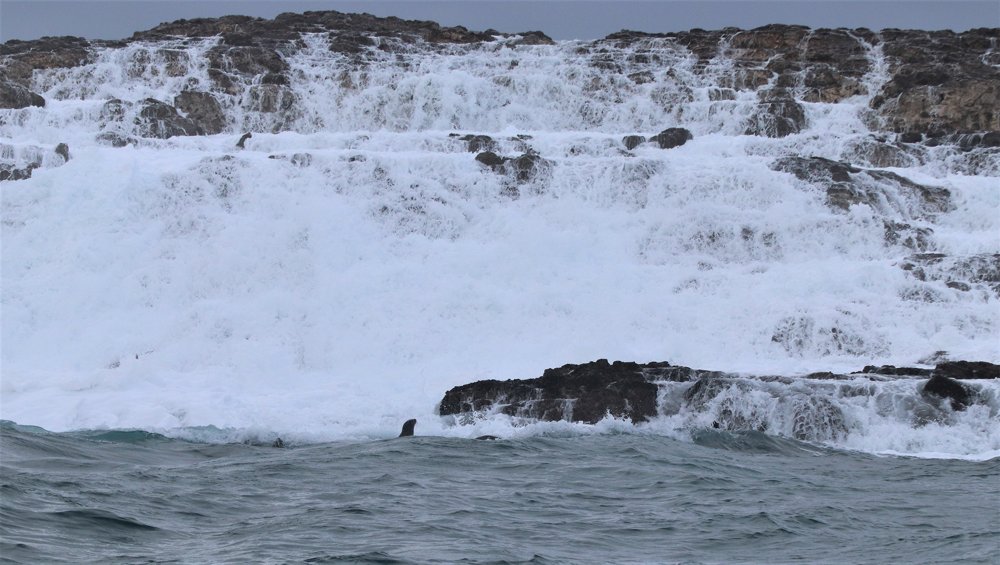 Raggy Charters has secured the permit to start White Shark cage diving in Algoa Bay and it is here in these calmer, protected waters on the inside of the Black Rocks reef, close to Bird Island that they have selected as the best place to conduct the shark cage diving and Alan Tours will be right there with Raggy Charters, providing guests with an adventure of a lifetime on the Original BIG7 Safari.

What a spectacular place, here we were bobbing around like a cork in these turquoise and white waters, sheets of spray tens of meters high into the sky, back lite by the sun against the dark rainclouds as wave after wave crashed against the rocks.

One could see the seals in the water washing back and forth like kelp in the current, flowing in and back out again with the ebb and flow of the water as the waves arrived and got sucked back out again.

Trying to get photographs was difficult from a platform that bobbed from this side to that, changing direction, sideways, up and down, port to starboard, left and right as each swell formed and carried through into the next channel. We got some pictures and they capture some of the essence of the day, but most were lost in the delirium of movement. 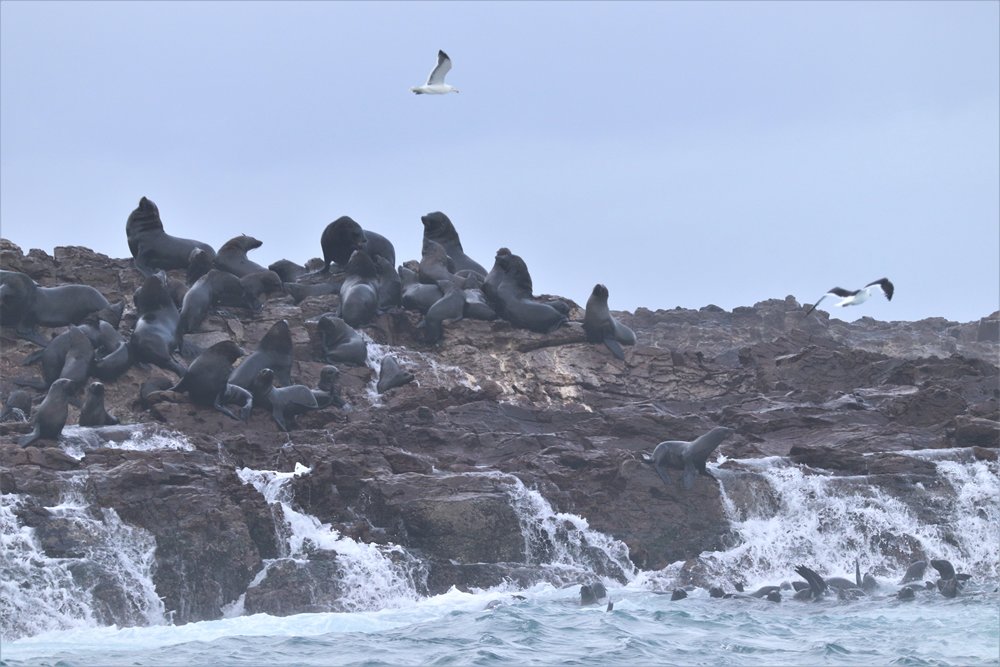 What a way to see Bird Island and the seal colony. Lloyd got into the lee of the Island where Jake produced some snacks for those who still had the stomach and some soft drinks. 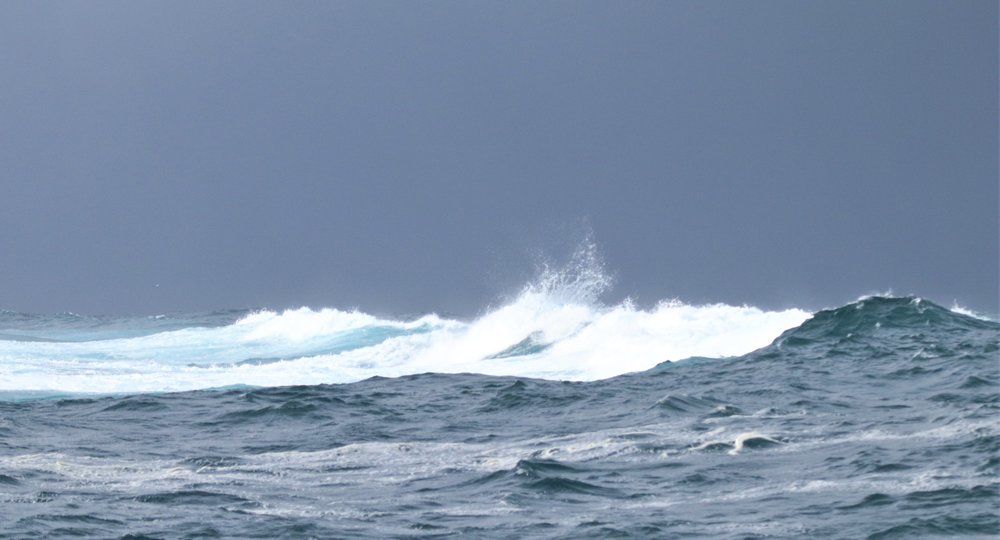 Here we relaxed a bit had something to eat while watching the perpetual motion to and from the island of the approximately 200 thousand Cape Gannet that call this flat island their home, the largest gannetry in the world.

Many other species of bird find their homes here including the seriously endangered African penguin, Black Oyster Catchers and a number of different Terns species including the threatened Rosette tern.

After our brief break we made our way parallel to the northern shore of Algoa Bay along the Woody Cape coastline and the Alexandria dune fields, the largest Aeolian dune fields in the southern hemisphere towards our next destination the St Croix group of island. 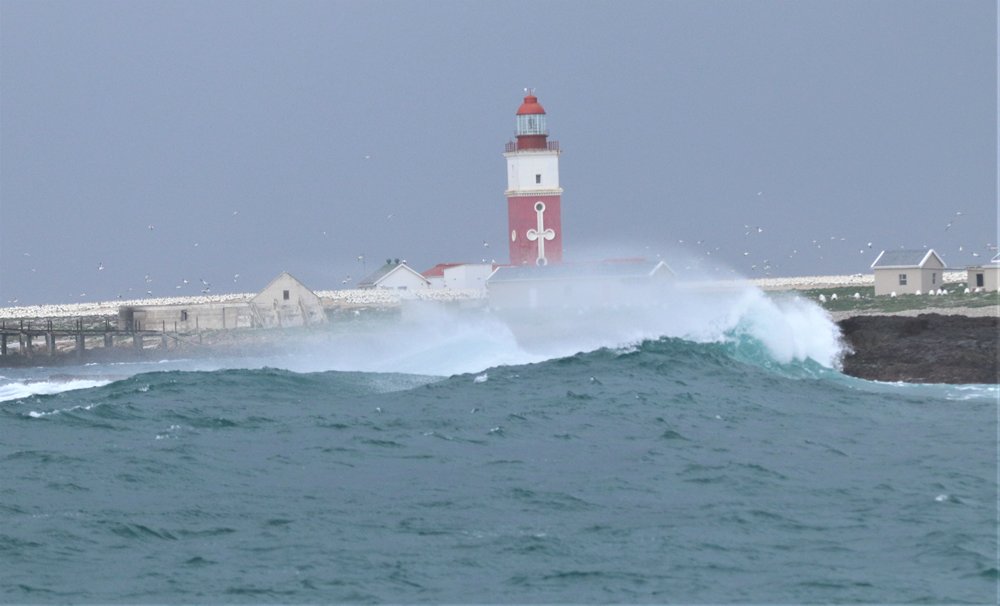 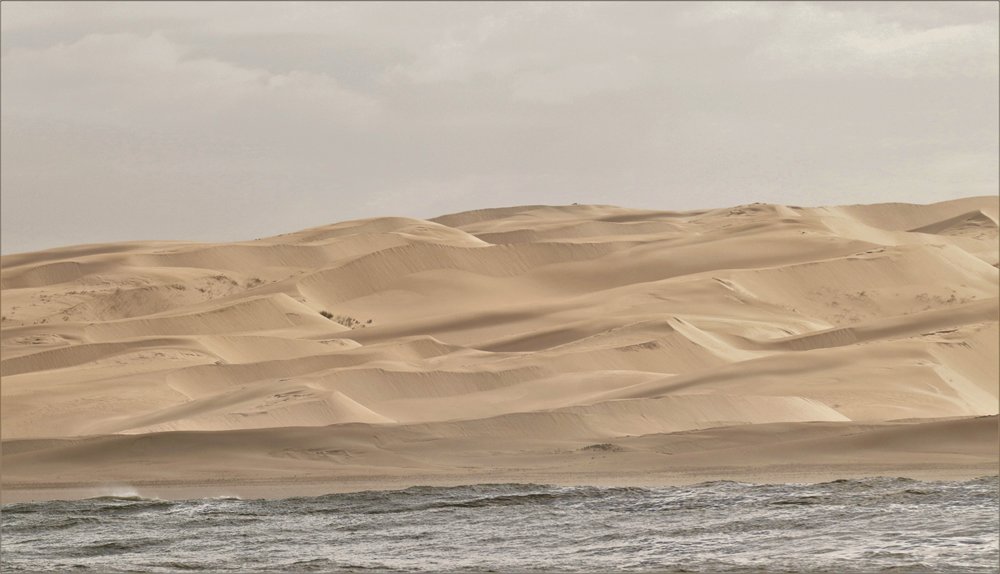 t was a long and rough journey with large swells and a persistent south westerly driving the swells onto the shore.

It took skillful navigation to keep us on track but eventually one could make out the humpbacked shape of St Croix Island off the Sundays River mouth. The wind started to behave itself, a little later than predicted but it calmed down considerably and was a welcome respite from the earlier battering.

On approaching the island Jake passed a comment about what we now needed is a pod of about 600 Dolphins to help cheer everyone up after the rough passage from Bird Island.

It wasn’t 10 minutes later and we were off, Jake having spotted what looked like a pod of Dolphins in the distance and there lo and behold was a huge pod of 600 plus Bottle nosed dollies who we stayed with for about 20 minutes as they made their way to the island and lovers lane, a near shore channel the dolphins seem to enjoy so much that many of them get down to a little hanky panky while in the safety of the zone. 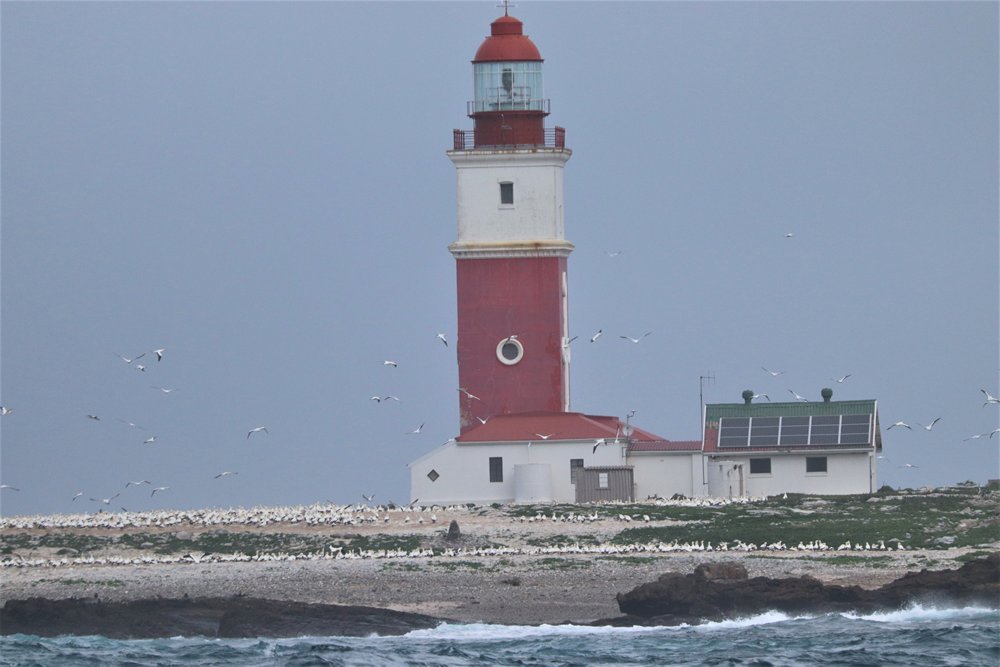 What a wonderful finale to a day I will remember forever. Thank you, Raggy Charters.