A short introduction to the Rock art of southern Africa.

There are over 15 000 sites in Southern Africa where such paintings have been found. The oldest in Namibia maybe as old as 27 000 years,though most were probably painted within the last 2 000 years. the Kloofs of the Cape Mountains.

The Cedarberg and the Baviaanskloof, in particular – have many caves with beautiful paintings on their walls and ceilings.

The best examples however are to be found in the massive mountains to the north “The Barrier of Spears” as the nguni knew this range of mountains.Now called the Drakensberg.

Here the paintings take on different hews, known as polychrome paintings and are exquisit in their fine detail and delicacy.

The Bushmen lived in the mountains for centuaries before the spread of European ‘civilization’, destroyed their old way of life. 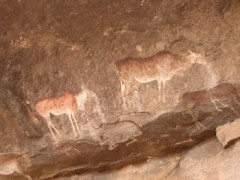