The light that watches over Algoa Bay - Cape Recife lighthouse

Lying within the bounds of the Cape Recife Nature Reserve on the southern boundary of Port Elizabeth is an active lighthouse that has been warning sea captains off Thunderbolt Reef since 1851. The area is particularly prone to fog, and the lighthouse is an essential guide to passing sea traffic.

How to get here

Take Marine Drive and head south along the Port Elizabeth beachfront. You will soon head through the gates of the Cape Recife Nature Reserve, where the lighthouse is the main visual beacon.

Cape Recife lighthouse looks great any time of the year.

Port Elizabeth has many hotels and guesthouses – see the listed website. Look for a place in the nearby Summerstrand area.

As you drive up to the Cape Recife lighthouse on the southern tip of Algoa Bay in Port Elizabeth, you might well find yourself in a swirl of mist. You might also experience that deliciously creepy feeling of being momentarily lost in time, with only the swinging beam of a lighthouse to guide your way.

The zebra-striped Cape Recife lighthouse warns passing ships of the dangers of the equally romantically named Thunderbolt Reef, which has claimed many victims over generations of southern African seafaring.

The deadly spine of rocks is named after the HMS Thunderbolt, a steam-driven man o’ war that ran onto the reef on a fine day in 1847. There was hardly a cloud in the sky, and certainly no fog or mist.

The Thunderbolt was refloated and beached in Algoa Bay. She was, however, beyond repair. Her timbers were sold to a Mr JO Smith for just more than 100 pounds sterling. The locals thought he’d been had, and immediately dubbed the purchase ‘Smith’s Folly’, according to travel writer Lawrence Green in South African Beachcomber. 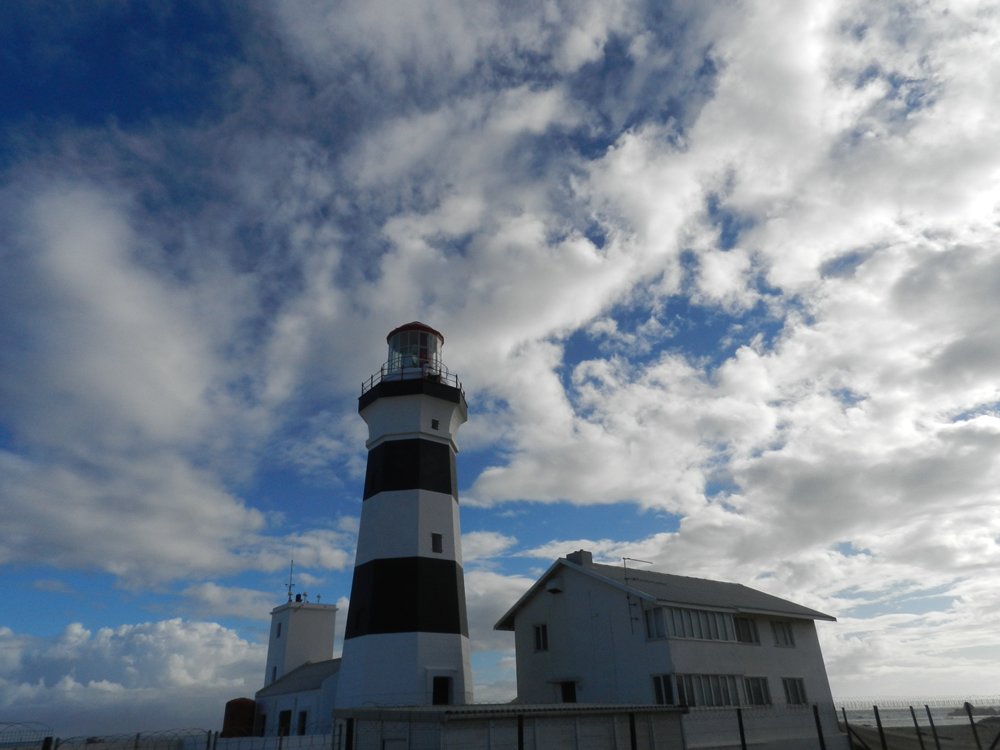 Smith, it seems, had the last laugh. He sold the timbers on to house builders in Port Elizabeth and made a good profit. So when you do a heritage walk of the Windy City and you pass some of those lovely old Victorian homes, you might well be seeing little bits of the HMS Thunderbolt.
The Cape Recife lighthouse was built in 1851, and over the decades has served its purpose. However, it did not deter some rather determined sea captains from beaching their vessels around Algoa Bay.

A certain Captain Nimmo beached his freighter, the Strathblane, after striking a mysterious pinnacle of rock out at sea. After his men landed safely, Nimmo calmly had his bath, dressed up and disembarked. He took the next Cape cart to Port Elizabeth, where he reported the unfortunate incident.

And just before World War I was declared in 1914, the German steamerItzahoe appeared out of nowhere 1 night, heading straight for the lighthouse at speed. The shocked light-keepers resorted to yelling and waving their arms at the vessel, which continued straight onto the rocks nearby.
The Cape Recife lighthouse itself carries some tragic memories. Sometime in the mid-1900s, a fight broke out between 3 squabbling light-keepers up on a hoisted scaffolding, and 2 fell to their deaths.

These days, the lighthouse is part of the Cape Recife Nature Reserve and welcomes visitors by day … if they can make it through the mist.

Click here for the Lighthouse Tour
Top
Enquire by E-Mail