Stories of the Khoikhoi

Send luck to me.

Give into my hand the wild game.

And I will sing your praise.

Are you not our Father’s father

It is said that the Khoikhoi, probably originated in the Horn of Africa and from there, they migrated to the region of the Great lakes. Driven from this area by the Bantu (Nguni) tribes, they then migrated to Southern Africa. Some of the clans of the community were left behind, however, and became independent settlements. The strange name of the Hottentots ( as they were called ) was given to these people by early Dutch visitors to Southern Africa who first met up with them near the Cape of Good Hope. Dapper, writing in the 1670’s states that they were given the name because of the harsh, guttural, and generally curious sounds of the language they spoke. The same name is applied in Dutch to one who stammers and stutters. Far from considereing themselves mere stammerers, however, these men called themselves the Khoi-Khoi or Men of Men’, and they drew a sharp line between themselves and the Bushmen, whom they looked down upon and called the Sa-n or San as they are commonly referred to today.

The Khoi-Khoi is yellowish in appearance with a narrow skull and prominent cheek-bones, and there is a theory that Bushmen and Khoi-Khoi were once the same race. ( It has subsequently been found that their DNA is indistinguishable).

Some broke away to raise cattle, build huts and lead a peaceful pastoral life, while the rest stayed true to the wilderness and the elements, and remained children of nature. It is said, too, that they originally all spoke the same language. All the Khoi-Khoi tribes could understand one another, but the dialects of the various Bushman clans diverge so widely that they became incomprehensible to one another.

The Hottentot has a perfect decimal system while the average Bushman was limited to little more than’one – two – three – much’.

Khoi-Khoi name all the boys in the family after the maternal side, and all the girls after the paternal half. The eldest daughter is always highly respected and the milking of the cows is left entirely to her.

Most of the Khoikhoi myths and legends have a solar and celestial bias like those of the Bushmen. The name of the Khoikhoi deity and supreme being in Khoikhoi folk lore is Tsui-Goab. To him they ascribe the the creation of the world, of man, and the elements. It is he that makes their crops prosper and gives them skins, full bellies and happy hearts. His opposite is Gaunab, a kind of vengeful devil.

This very same Tsui-Goab, the supreme being of the Khoikhoi, is the subject of the strangest of stories. He is known to have first lived many generations ago, when he was said to have been an old shaman or Sangoma with a broken knee named U-tixo. Among the Khoikhoi, he was renowed as a sorcerer of great skill. Having been regarded as extraordinarily powerful during his life he was invoked after death as one who could still bring help and protection, and with the passing of time, he became closest to their conception of God.

U-tixo, they said was a powerful chief of the Khoikhoi and the first khoikhoi ever. He made war against a wicked chief called gaunab who had killed many Khoikhoi. They had many battles. Each time U-tixo won, and grew bigger and stronger. at last, in the final terrific struggle, he gave Gaunab a great blow behind the ear. While gaunab lay dying, he landed a last blow which hit U-tixo on the knee. and since then U-tixo has been called Tsui-Goab or wonded knee.

He was a prophet and able to do wonderful things. He died several times, but each time returned to life, providing occasion for great feasting and rejoicing. 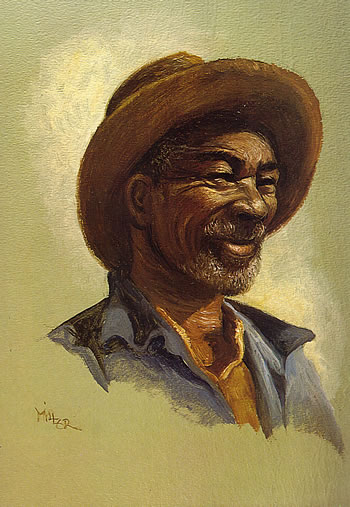 He made the clouds and lived in them, and brought the rain. Thus through him the cattle were plentiful and the grazing good. Tsui-Goab resdides in a beautiful heaven of light and sunshine, and Gaunab, meaning destroyer’, lives quite seperately in a dark retreat. He sends the sleep of death to man, but Tsui-Goab, the Red dawn, brings the light of life. The Khoikhoi always pray in the early morning with their faces turned towards the east where Tsui-Goabs first light appears. 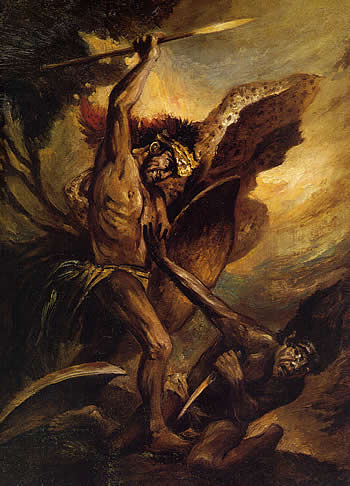 The folklore of the Khoikhoi does not contain quite the same richness of humour and detail as that of the Bushmen. Most of it is of a more domestic and mundane nature.

They lack the same closeness to nature, affinity with the elements and sensitivity to their environment that is noticable in the Bushmen chracter. Their outlook on life is more down-to-earth and pragmatic. Indeed, they regard the Bushmen with great fear and suspicion (though they were often neighbours), and avoided confronting that fierce and unpredictable people. The oldmen would tell of whenthey were hunting and came upon the Bushmen: the Bushmen, though small, were always insolent, and demand tobacco.

The Khoikhoi huntsmen would scrape out the dregs from their pipes for them. when they smoked this, the Bushmen became “drunk’ and lay down; while they lay there, the hunters would run away. They said that if they had no tobacco they would certainly have been killed.

Although the Hottentots or Khoikhoi as they are correctly refered to today, were aware of the existance of witchcraft and sorcery, they wished to have little to do with it. From early manhood to old age, straightforward actions were demanded, and from childood these were taught as desirable and manly qualities.

Witchcraft was only practised in secret and was therefore to be shunned and despised. The people had their traditional superstitions, and believed in bth good and bad omens, but the nearest they came to practising legitimate witchcraft was when they made medicine for the woman whose love they wished to attract.

This medicine took the form of finely pounded substgances strewn on her bed-skins or mixed with tobacco which she was given to smoke. It was only when the Khoikhoi began to make aquiantance of the Bantu that the possibilities of working greater good and evil became more apparent. 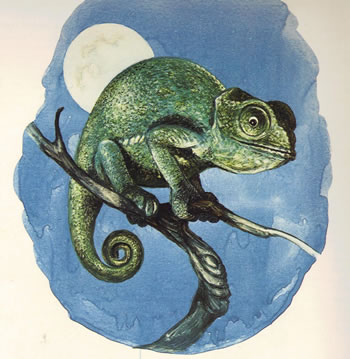 Naturally, with a people living so closely and in tune with the natural cycles of the Earth, the weather played the most vital roll in the lives of the khoikhoi, just as it did with the Bushmen, but the khoikhoi had livestock to care for. They needed good rain for grazing and had many feasting and dancing rituals to bring on the desired rainfall. They also sent parties into the veld (field) to search for the elusive Chameleon, which was supposed to bring rain.

When found the Chameleon was buried alive stomach upwards in the earth, and special care was taken not to injure it. The people firmly believed that it would rain the same day. When this happened (hopefully for the Chameleon’s sake this was often), and after sufficient rain had fallen, or the rolls of thunder had grown quite frightening, the Chameleon was dug up and set free.

A substitute for the Chameleon was the Cape Cobra which however did not fare so well. It was half killed before burial, and only finnished off when no more rain was required.