Sun, Moon and Stars in the night sky 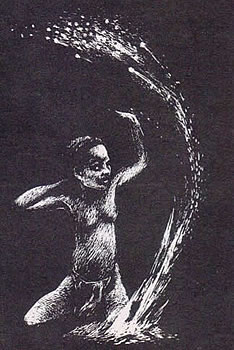 There are many stories told of the sun, moon and stars. Some stories say that the Sun was once a man from whose armpits shone rays of light. He dwelt alone in a hut and his light shone only for himself. Some children belonging to the first Bushmen were sent to throw the sleeping Sun up into the sky, from where he now shines upon all. In the evening, he draws his blanket of darkness over himself to keep warm. But the blanket is old and has many little holes in it and at night the sun still sparkles through them to make stars.

Another story tells of a lonely young girl who waits the return of her hunter companions.

To light their way in the darkness of the night she throws up a handful of white woodash from the fire. This becomes the Milky Way and even when their is no moon, its light guides the hunters home.

The Moon, say the Bushmen, is really an old shoe belonging to the Mantis, who threw it up in to the air to guide himself. As it rises, it is red with the red dust of Bushmanland, and cold like old leather. They say the sun is jealous of the moon when it is full as it is a challenge to the Sun’s brightness.

So with its sharp rays the Sun cuts bits off the Moon until there is just a little left and the old Moon cries, Oh! Oh! leave a little backbone for the children!’ Then the Sun goes away. and soon the Moon starts growing back, little by little, to its normal size and the process starts all over again.

Some say that when the moon is hollow and young, she is weighed down with the spirits of the dead which she carries, and the clouds that pass are really the hair of the dead, and the wind blows to sweep the footprints of the dead from the sand.

The Bushmen believe that the world was made by the spirits which are all around them.

Whatever tale they tell, it comes from within them and as one Bushman says,

There is always a dream, dreaming is us!, Without a story, a Bushman is without a home.