The Bushmen, San or !Kung

Introducing the Bushmen also know as the San or !Kung people 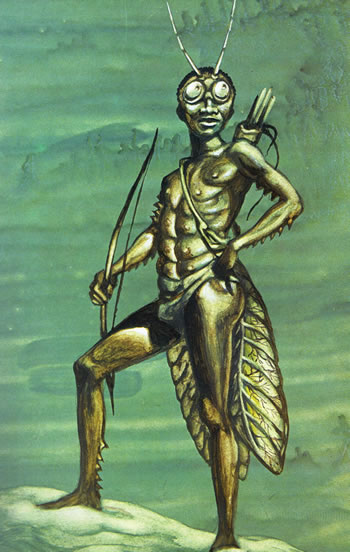 On religion: Kung, like the Bushmen as a whole, are traditional tribal religionists and very close to Christianity. They believe the celestial bodies (sun, moon, morning star, and the southern cross) are symbols of divinity. They believe the praying mantis is a divine messenger and when one is seen, diviners try to determine the current message.

Other animals also have spiritual significance for them. They also believe that dancing near a sacred fire will give them the power to heal. Their spiritual leaders are diviners and healers.

Legends play an important role in the life of the!Kung. Each story is someone’s perception of the supernatural. Each tells its own truth, bringing to light some aspect of the divine.They believe ancestors are involved in curing rituals, but they do not revere the dead as the Bantu peoples do.

The sacred Tsodilo Hills are legendary. The story goes that a man had two wives, but he loved one wife more than the other, and this caused a big quarrel. The one he didn’t love hit him on the head, causing a deep wound. Then she ran off into the desert. But the Great God, Gaoxa, decided that because there was no peace among them, he must turn them all into a stone.

The man became the largest of the hills; the unloved wife became the smallest hill that stands alone; and the loved wife, with her children, became the cluster of hills in the middle. But they believe there are supernatural powers in the Hills because Gaoxa himself lives there. It was there that he created and kept his cattle, sheep, goats, and all sorts of different animals. The !Kung claim you can see the footprints in the rocks.

Some Bushman clans along the middle reaches of the Orange river have a quaint myth which explains the origin of Men and Animals, their early friendship, and how this was lost. These people say that their remote forefathers came out of a hole in the ground at the roots of an enormous tree, covering a wide extent of the country. Immediatly afterwards all kinds of animals came swarming out after them, some in twos, threes and fours others singly or in flocks and herds.

They crushed, jostled and pushed one another, so great were their numbers. Ever thicker they swarmed until they were even emerging from the branches as well as the roots. But when the sun went down, the animals ceased to appear. Those already there remained, peacefully resting, around the bottom of the tree. Like the men, they were all endowed with the gift of speech.

Bushman; the origin of Men and Animals

As the night came on, the men who were sitting with them grew cold and wished to make a fire to warm hemselves, but a divine voice told them to make no fire, but to wait until the sun rose to warm them in the morning. They remained like this for many hours, with the animals sleeping around them. But the night grew darker and the cold more intense until the men could stand it no longer. In spite of the warning that had been given to them, they succeeded in making a fire.

As soon as the flames began to flicker, the animals sprang up in terror and rushed off. The panic-stricken hordes escaped into the mountains and plains, losing in their fright their power of speech, fleeing forever afterwards the prescence of man. Only a very few animals remained behind with the firemakers and these the men domesticated and kept for their own use. But the great family of men and beasts was broken up, never to be united again.