Wreck of the Sacramento by Chris Marais. March 2012

"Wreck of the Sacramento" by Chris Marais – www.southafrica.net -

A Portuguese wreck loaded with cannon: Wreck of the Sacramento

The way the elegant Portuguese man o’ war called the Sacramento was shipwrecked off the shores near Port Elizabeth, the dramatic 1400km journey of survivors making their way north to a Mozambican port, and the subsequent discovery of the ship’s many cannon make for a stirring South African sea tale.

How to get here
From Port Elizabeth Airport you take the M18 on Victoria Road through the suburb of Walmer and follow the signs to Schoenmakerskop. The drive out should take you no longer than 30 minutes.

It’s a year-round destination, so pick a clear day with good visibility and pleasant walking conditions.

There is lots to do in Port Elizabeth, including a visit to the local aquarium and museum. There are also great day trips to the Addo Elephant National Park, Grahamstown, Port Alfred and Jeffreys Bay.

DID YOU KNOW?
A perfectly preserved Sacramento cannon stands at the Prince Alfred’s Guard headquarters in central Port Elizabeth.

The Sacramento was the pride of the Portuguese fighting fleet in the 17th Century. She ran aground just off Schoenmakerskop outside Port Elizabeth on 30 June 1647 in foul weather. By the time she hit the rocky coastline, she had a badly damaged rudder and her sails were in tatters.
The legend of the wreck of the Sacramento has many dramatic parts, 1 of which is the march of the 72 survivors up the coast towards a port in Mozambique, from where they hoped to be transported back to Portugal.

The distance from Algoa Bay (site of the modern-day Port Elizabeth) to the haven in Mozambique was nearly 1400km. The Sacramento survivors stayed on the beach near the wreck site for 11 days before beginning their pathetic trudge up the coast. Along the way, their numbers dwindled to 9 souls.

As they walked, they came across 2 other wreck sites of ill-fated Portuguese vessels: the Nossa Senhora de Belem and the Atalaya. More than 4 weeks into their trek, they met up with a large contingent of survivors of the wreck of the Atalaya. Eventually, 127 people from the wrecks of the Sacramento and Atalaya made it to Lourenco Marques (now Maputo).

The Sacramento, a highly prized man o’ war with 60 fixed cannon, was heavily loaded with a cargo of brass cannon destined for the Portuguese-held districts of India. In fact, 1 of the cannon carried an inscription from its maker (famous gunsmith Antonio Backer) bearing the name of Antonio Telesdemenez, the Portuguese governor of India at the time.

The many cannon of the Sacramento lay undisturbed on the ocean bed for 330 years until most of them were salvaged in 1977. One brass cannon had been totally submerged under the sea sands and was brought up in perfect condition.

One of the original Sacramento guns stands at a special site on Schoenmakerskop, pointing out in the general direction of where the warship met her fate. A plaque briefly tells the story wreck of the Sacramento. 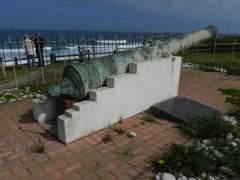 Visitors to the Sacramento memorial site also have the option of embarking on the Sacramento Hiking Trail between Schoenmakerskop and Sardinia Bay. It’s a lovely mix of attractive coastal and ocean sights: gannets and dolphins at sea and large displays of wild flowers on land and as you walk, spare a thought for others who left their footsteps here in more perilous circumstances.

Click here for the Wildside Tour
Top
Enquire by E-Mail