The noble Mantis of Bushman mythology 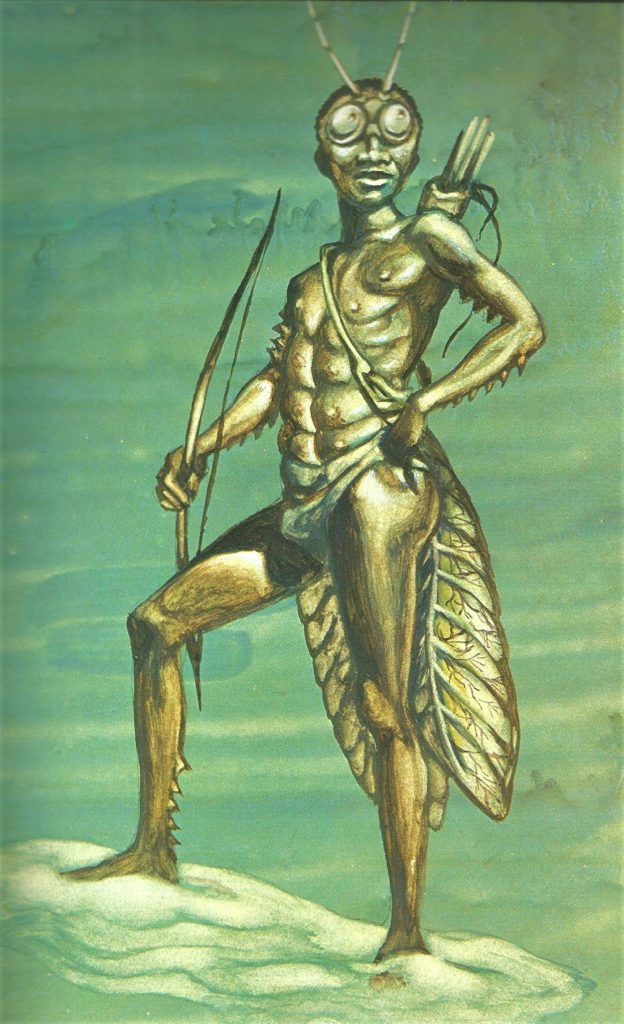 Water in a desert country is so precious that for those who depend on it, it can assume divine properties. To the Bushman water is the ancient symbol of life. In it he can revitalize himself an make a fresh start. His legendary hero, Mantis, appears at the time of the beginning of the world, when the face of the earth was covered with water.

Mantis was carried over the tumult of the dark and turbulent water by a bee (bees, as honey makers, are an image of wisdom). The bee, however, became warier and colder as he searched for solid ground and Mantin felt heavier and heavier. He flew slower and sank down towards the water. At last, while floating on the water, the bee saw a great white flower, half-open, awaiting the sun’s first rays. He laid Mantis in the heart of the flower and planted within him the seed of the first human being. Then the bee died. But as the sun rose and warmed the flower, Mantin awoke and there, from the seed left by the bee, the first Bushman was born.

In addition to life, Mantis also brought the first fire to the people. Before this, they ate their food raw, just as they killed it, like the Leopard and the Lion and they slept in their shelters at night, with no cheering light to brighten the long dark hours. Mantin had noticed that whenever Ostrich went to eat, his food smelt different and delicious. So one day he crept close to Ostrich to observe him as he ate. He saw Ostrich furtively take some fire from beneath his wing and dip his food into it. When he had finished eating, he carefully tucked the fire back under his wing and walked off.

Mantis knew that Ostrich would not give him any fire, so he decided to make a plan. One day he went to visit Ostrich. “Come”, he called, “I have found a tree with delicious yellow plums on it.” Ostrich was delighted. He began to eat the plums that were easiest to reach. “no, higher, higher! The best ones are right at the top”, Mantis urged him.

As Ostrich stood up on tiptoe ad spread his wings to balance himself, Mantin snatched some of the fire beneath his wing and ran off with it. This was how he brought fire to the Bushmen. Since then, Ostrich, terribly ashamed, has never flown and keeps his wings pressed to his sides, to preserve the little fire he has left.

According to the Bushman, the Ostrich has always been rather an odd fellow. When the female makes her nest in a hollow in the warm sand, she lays 20 to 30 round, creamy eggs, but invariably leaves one outside. Why? Because she and her husband are so busy brooding on the theft of his fire that they can be very absent-minding. She is even liable to forget she is sitting on a clutch of eggs and so she puts one outside, just to remind herself and her husband that they are there.

Although Mantis is a type of “superbeing”, the Bushmen do not regard him as a god like the moon and sun. Indeed, he is all too human and in many ways personifies the Bushmen himself. He is a kind of dream-Bushmen and resembles the real mantis, with his small wedge-shaped face and intelligent look. The figures which primitive artists painted on the walls of their rock shelters prance along like Mantis himself.

Mantis is very much a family man and likes to have his folk around him. His wife is Dassie, the rock hyrax. His son is young Mantis, very like his resourceful father. Porcupine is an adopted daughter whose real father is a weird monster called the All-Devourer, with whom she is too frightened to live.

Porcupine is married to a being who is neither human nor animal but a part of the rainbow, called Kwammanga. They have two sons, one called Kwammanga after his father and the other Mongoose or, as he is sometimes known, Ichneumon. The latter is a bossy young character who is always putting his grandfather Mantis in his place. Mantis also has a sister, a lovely lady called Blue Crane, of whom he is most fond.